I promise, this is not some sort of joke, these people are actually serious. 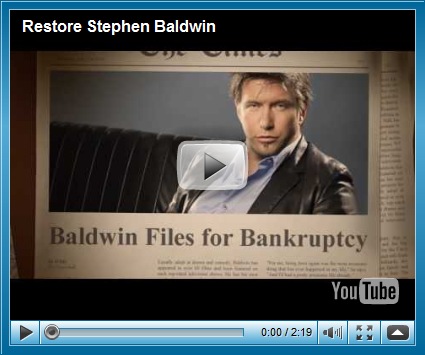 Long ago in the land of oz lived a man named Job.  Job was the most influential man in the east.  A man of great wealth who stood for righteousness and God.  Through trials he lost his children, his health, his home and wealth, yet Job stood in faithfulness to God, never turning his back on him.  Because of this he was instantly restored by all who knew him.  Stephen Baldwin of the famous Baldwin brothers Hollywood clan is a veteran actor who has starred in over 60 films and television shows.  He’s no stranger to the Hollywood life of glitz glamour in the public eye.  In 2001 he had an experience that changed his life forever.  He became a born again Christian giving his life to Jesus Christ.  Over the next few years he became very vocal about his faith, using his spotlight to boldly preach the gospel to millions of people.  However, because of his convictions it began to cost the loss of several jobs, most recently a highly publicized bankruptcy.  He had been publicly ridiculed and insulted by people who think that he has been abandoned by God.  A simple search throughout the internet will reveal that people not only mocked Stephen but mocked God as well.  In response to this with the permission of Stephens ministry president Daniel Southern we have established RestoreStephenBaldwin.org a privately funded and managed website.  Our vision is to Stephen Baldwin publicly restored in front of millions.  Stephens platform will increase, allowing him to reach even more people with the gospel and God will get all of the glory.  Job was stored by the people, all who knew him.  This website was created in footsteps of Jobs restoration.  If the people of God come together and each give a small token gift we can see a massive restoration of a Christian public figure and all of the glory will go to God.  Join the movement, visit RestoreStephenBaldwin. org.

Stephen Baldwin has made millions of dollars within his lifetime and because he overspent, and did not manage his money properly he is a victim?  He is a member of the most privileged class ever to walk the face of the planet, and yet we are to believe that he is being persecuted for being a Christian?   It’s people like Baldwin that give Christianity a bad name.

I think what I find amazing about this entire situation is that America has a strong pull yourself up by the bootstraps mentality even when you don’t have a boot.  Here we have one of the most privileged members using fake persecution to justify his failures whereas; a poor woman of colour would be granted no quarter. You see, poor women of colour are told that there is no reason to fight for women’s right because equality has been achieved.  We also supposedly live in a post-racial world thanks to Barrack Obama and Oprah Winfrey and therefore; racial discrimination is not considered a relevant factor in the continuing social imbalance.  When POC are persecuted, it typically not associated with systemic factors-- it usually becomes conflated with a supposed lack of personal responsibility.

Poor Stephen Baldwin is suffering because his family (also millionaires ) will not help him. “His family does not perceive Stephen’s predicament as a matter of spiritual warfare. They see Stephen’s outspoken Christianity as poor choices therefore they will not help”.  Stephen Baldwin claims that: “When he became an outspoken Christian in 2002 his income went down by 70% when he refused roles with gratuitous sex and violence”.  Of course, this has nothing to do with his personal choices –oh no, it is systemic oppression.

Finally and perhaps most importantly, Stephen Baldwin needs this money because:

Stephen’s influence is in Hollywood. Hollywood worships money and without it you are seen as a loser and cannot be an effective influence to this group. Stephen needs several million dollars to pay all of his creditors but he deserves hundreds of millions for his Job like faithfulness in the face of relentless loss and persecution.

There is no large push to restore the property and money taken from the Japanese because of internment in WWII.  Even daring to bring up reparations for 310 years of slavery is enough to start a backlash regarding how no one in the current generation has ever enslaved anyone -- never mind that they continue to benefit from slavery --but Stephen Baldwin needs to be restored because of the persecution he faces.

There are real examples of suffering in this world and Stephen Baldwin does not fall within that category.  I am going to use his own words against him and suggest that he get a real job.  You see, unlike bodies that face real marginalization, fat people, POC, women, older citizens,  the TLBG community, etc., Baldwin is capable of getting a job paying a living wage and I heartily suggest he take that option.  It is after all about individual responsibility isn’t it…