Sandra Bullock and her Secret Baby 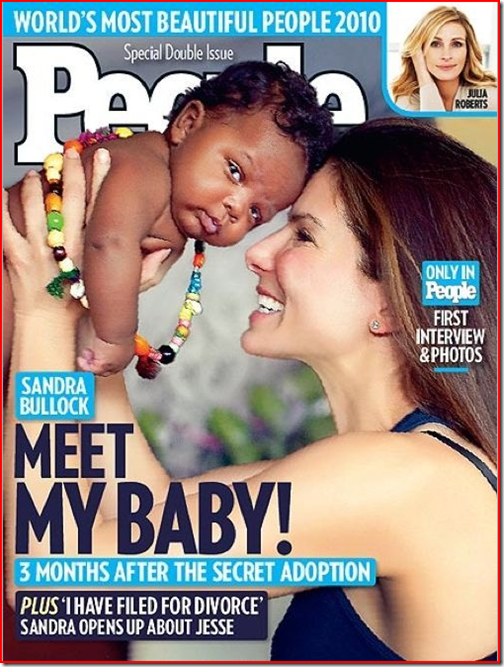 Sandra says of her decision to divorce: "I'm sad and I'm scared." Louis was born in New Orleans, and Sandra and Jesse began the adoption process four years ago, and brought Louis home — in secret — in January. Only close friends and family knew about the child. Sandra is clearly smitten with Louis, saying,
"He's just perfect, I can't even describe him any other way," and "It's like he's always been a part of our lives." [People, People, AP]

Aww isn’t that sweet?  Another White earth mother finding fulfillment raising a brown baby.  Thanks goodness she has Louis to help her get over her cheating husband. Isn’t it wonderful that she has an Oscar and a brand spanking new Black baby to commemorate her role in “The Blindside”?

Yep, she kept him a secret for his own good, cause a three month old baby would have been affected by the negative press.  Give me a fucking break.  It couldn’t possibly be about the close relationship to the character she played and the race of her son some black woman’s child could it?  Then of course, when it was revealed that she had been married to a man with dubious (note: the word dubious is a generous choice of words) views on race, out comes the news of this wonderful Black baby that she is soooo in love with.

Yeah, I am full of snark on this one.  As I said in an earlier piece, it says something about her that she married Jessie James in the first place.  Don’t tell me that the man just lost his mind when he saw McGee, one does not just fall into bed with an admitted White supremacist without having racist views.  But poor innocent, sweet Sandy just missed all of this.  Think about the fact that this is the same man that she had initially thought to raise a Black child with.  I suppose when massa daddy said something racist, Bullock planned to be right there to teach little Louis not to be sensitive -- after all, it’s a wonderful world right?

Really I wish Sandra would just go back into hiding.  The world has seen enough White celebrities toting around their Black/Brown babies.  Granted, at least she didn’t steal the child the way that Madonna did, but still, enough is enough.  She could have used her influence and her wealth to help struggling Black mothers, and she could have advocated for change in the adoption system, but instead she decided to become an earth mother as her next staring role.  This is about Sandy and not little Louis.  Kiss his little feet and dry his tears, but what are you going to say when the child gets called nigger -- cause I guarantee it will happen, and it might even be done by someone who looks like his dearest White momma.

Louis will now have all of the privileges and rights that come with being the latest pet of a White woman, so it really is too bad that he won’t be able to catch a cab when he grows up. But hey, he has the honour of becoming someone’s living breathing liberal credential.

Editors Note:  Due to the vitriol that is appearing in the comment section and the hate speech that is landing in the spam que, this post is now closed for any further comments.  I apologize for the inconvenience; however, there are limits to what I will tolerate.