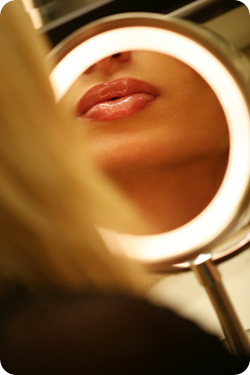 Plastic surgery has become very commonplace as the prices for procedures have dropped. According to the American Society of Plastic Surgeons, 91% of all surgeries for a total of 11 million procedures were performed on women in 2008 alone. We live in a society that constantly scrutinizes our bodies while imposing standards that have become increasingly unattainable. For women, the added pressure of sexism makes the failure to conform that much more problematic. From the dolls little girls play with, to the images in magazines, perfection is the only option that is effectively given to us.

According to US Magazine, Heidi Montag recently had an interview with Ryan Seacrest in which she discussed new details in her plastic surgery marathon:

“In addition to familiar-sounding enhancements — nose, cheekbone and chin jobs, eyebrow lift, breast enlargement, fat injections — Montag said that she also ‘had my back scooped.’ When Ryan Seacrest asked her to clarify what a ‘back scoop’ is, Montag replied, ‘I actually didn’t know. I might be the first one to try it. It carves out your back a little bit.’”

The fact that even after the surgery that Montag was unable to be coherent about the procedure reveals an issue with informed consent and her understanding of her body’s appearance. No patient should ever undergo any medical procedure without being fully aware of what is going to occur and what the risks are. Though plastic surgery has become routine, going under general anaesthesia should always be understood as a risk — patients have died on the operating table.

There is a tendency to dismiss Montag as someone who is unstable, but the American Society of Plastic Surgeons reports that in the year 2008, multiple cosmetic procedures performed at once increased 9% and repeat patients also went up by 7%. It would seem that Montag may be a bit more typical than we would like to admit.