I was reading a horrendous story about the fact that corrective rape of both gay men and women is occurring in Zimbabwe. According to Rod 2.0, President Robert Mugabe and Prime Minister Morgan Tsvangirai rejected calls to include gay rights in the new constitution that is being drafted.

"Gay men were forced into heterosexual acts and lesbian women were raped, sometimes by male relatives, to teach them to change their ways, said Amanda Porter, political officer at the U.S. Embassy in Harare and compiler of the report. 'Some families reportedly subjected men and women to corrective rape and forced marriages to encourage heterosexual conduct' she said Tuesday. Homosexuals reported widespread discrimination in 2009, the year under review. But the report notes that the conservative southern African country has long frowned on homosexuality. Hate speech by politicians against the nation's small gay community fuelled social pressures on families, Porter said. And crimes against human rights and sexual abuse against gays were rarely reported to police. 'Victims are afraid to speak out,' she said.

I am sure that most, if not all of those reading the blog can agree that the situation in Zimbabwe is dire for the LGBT community.  In my opinion, rape is the worst violation that one can undergo and having it done at the hands of your own family (those that are supposed to cherish and love you), adds to the horror I am sure.  The government of Zimbabwe is determined to ensure that their GLBT community has no quality of life, or rights under the law.

The following quote appeared in the comment section of Rod 2.0 in response:

Corrective rape? This Mugabe is a monster. We need to be talking about him the way they talked about Hitler. I can't imagine anything worse than being an LGBT person living on the African continent or in the Caribbean.

I will not argue with the fact that Robert Mugabe is a  monster, but does he really rise to the level of Hitler?  Let’s not forget that Hitler lead Germany to incite a second world war (note: I acknowledge the appeasement engaged in by the west) and intensified Anti-Semitism.  Before the rise of Hitler, it is quite reasonable to suggest that France would have been understood to be a far more Anti-Semitic nation, especially when we consider the Dreyfus affair.

Not  only did Hitler strip Jews of their positions, he forced them to wear yellow stars identifying them as Jews, enforced a curfew, vandalized their businesses and then housed them in ghettos. After plans to resettle Jews outside of Europe were dismantled, he lead the massacre of millions of Jews by firing squads and gas chambers. 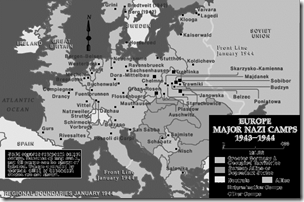 Some of the murder victims were even forced to dig their own graves before they were killed.  In the camps, some were experimented upon medically, routinely raped, and worked literally to death.  When the concentration camps were finally liberated by the allies, they were greeted by the walking skeletons that had somehow managed to survive.

Over 6 million political prisoners, Jews, Gypsies, disabled and gays and lesbians lost their lives under Hitler's rule.  Millions of people lost their lives fighting to bring an end to the Third Reich. This is the evil that was Hitler, and may none of his like ever be visited upon this earth again.   Only Pol Pot, Stalin and possibly Mao rise to that level.

As evil as Mugabe is, I think that it does a disservice to those who lost their lives, as well as the survivors of the Holocaust, to throw around references to Hitler.  Hold Mugabe accountable, protest against his government, provide safe haven for GLBT members escaping his tyranny, but please stop suggesting that this has risen to the evils perpetrated by Hitler and his Third Reich.  Too often, those that claim to be liberals will toss out holocaust and or Hitler as analogies without giving real thought to the experiences, lives and deaths that they are so haphazardly erasing.  There is real evil in this world and we should not be afraid to confront it and name it when we see it; however, whenever we falsely claim that something rises to the level of Hitler and his Third Reich, we are dishonouring the deaths of millions of people.

We have enough words to denounce Mugabe and all that he stands for without having to infer a connection to Hitler.  In fact, when we make this kind of comparison, we are not better than the right wing who have come to use this as a happy little trigger comparison to attack those they politically disagree with.  So in short, unless you are dealing with an actual holocaust or genocide as in the case of Rwanda, leave the Hitler and or holocaust comparisons alone, the dead and the survivors deserve more respect than that.