Sunday Shame: When the love of Bacon Goes to Far 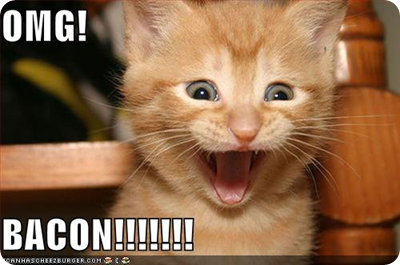 I know that Americans love their crappy bacon but honestly, there have to be limits. (Yeah, I’m calling your bacon crappy. It is nowhere near as good as Canadian bacon.) I was chatting with a friend of mine and she mentioned that she had recently bought some soap that smelled like bacon.  Your eyes did not deceive you, I said soap that smells like bacon.

Fortunately, she recognized how wrong this was and did not decide to bathe in it.  Can you even imagine?  Anyway, instead of relegating this monstrosity to the garbage where it most certainly belonged, she passed it on her to mother.

Let’s consider the work that motherhood entails. In the womb this woman jumped on her mothers bladder, and gave her morning sickness.  In childhood there were bedtime stories, and the cleaning of disgusting body fluids.  There were the endless nights of worry and the cooking and cleaning.  All of this time, effort, and love, and she rewards her mother by giving her soap that smells like bacon.

When I mentioned that this was absolutely shameful and that she would most certainly be the star of this week’s Sunday shame, her only defence is that her mother not only liked the smell of the monstrosity, but asked for it.  Jesus take the wheel.

Right now I dress and take care of my children, but I fully expect them to help me stay on track later in life.  If they let me out of the house with one of those terrible Easter egg hats, or find me dousing myself in bacon, I fully expect them to save me from myself.  She asked for it, is no excuse for letting your mother douse herself in bacon scented soap; it is a call for intervention.

I know I am 100% right on this one.  It screams of Sunday Shame…In fact it is so epic that it might even go down as the chief shame in the annals of Sunday shamehood.  So, let it fly in comments and while you are at, feel free to share what products you have had to hide or remove from your loved one to avoid a similar epic disaster.