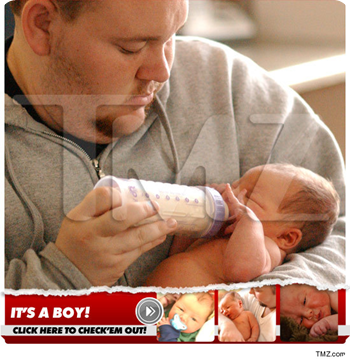 I came across the above photo on TMZ where of course the comment section is a hot mess because people are proudly displaying their transphobia.  Apparently, if you have a vagina and a uterus you cannot be a man and this desire to absolutely define people by their genitalia is limiting and extremely harmful.  Men like Scott Moore are being punished for transgressing the gender binary.

I want to say congratulations to Scott, but even as I was reading his story, I kept wondering why it is that we only hear about trans men in the media when they are having babies?  Remember the uproar over Thomas Beattie?   I know that pregnancy helps the argument of biological determinacy in the eyes of the trans bigots, but I am quite certain that trans men have more issues than whether or not they decide to produce a child.

I really think that the media has a way of jumping on an issue, sensationalizing it, and in the process riling up the public to extreme heights of hatred.   It almost feels as though they are chasing around trans men to find out if they still have their uteruses and if they have had any children, so that the media will have a chance to wallow in its transphobia.

This is once again an exercise in discipline and if the media really cared about trans men beyond the so-called shock value, then they we would hear more trans voices in pubic spaces.   We would be able to understand that there is more involved than how their bodies appear.  Granted, I don’t know nearly enough about trans men and their issues, but I am trying to learn. The purposeful silencing of their stories  to uphold the gender binary, makes it difficult for people that are interested in understanding their privilege and acknowledging trans men as men.

I really hope that I have not messed this up too terribly, as quite honestly this is not something that I have spent a lot of time writing about.   My main concern is that trans men be allowed to talk about their issues without the continual underwear check by the media.  Giving birth may indeed be an issue that is being discussed in their community, I just feel that cisgender people like myself don’t have any business weighing in on it.