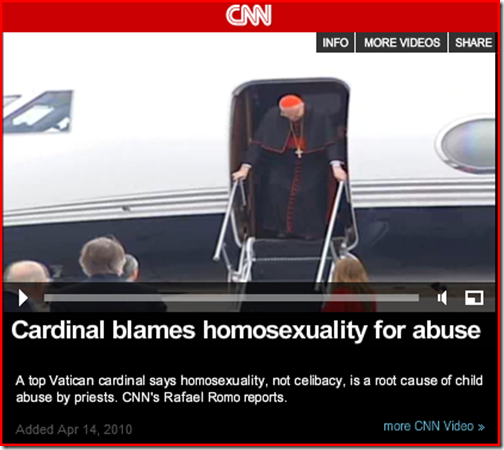 Click image to watch video due to embedding difficulties.

Transcript: As the Vatican secretary of state, Cardinal  Tarcisio Bertone is one of the highest officials in the Roman Catholic Church.  So when he commented on the sex abuse crises in the church at a news conference in Chile it got a lot attention.  The problem said Bertone  is not rooted in celibacy but in homosexuality.

“Many psychologists, many psychiatrists have demonstrated that  there is no link between celibacy and pedophilia.  But many others I was told recently that there is a relationship between homosexuality and pedophilia”.

Cardinal Bertone spoke in Santiago, the capital of Chile, on a week long visit to the South American country.  His comments offended many in Chiles gay community.  The Movement for the Integration and Freedom of Homosexuals, reacted angrily saying:

“The Catholic Church hierarchy will at some point have to apologize for this perversion, for the sinister attitude of this Vatican gentleman.  We are certain that there’s no relationship between pedophilia and homosexuality.”

Bertone also told Chilean Catholics that the Church has repeatedly apologized for the Church’s sex scandal.

On Monday the Vatican posted a guide on its website on how Church officials must handle cases of sexual abuse.  The document states that civil law reporting the cries to the appropriate authorities should always be followed.  It also says that Bishops have the power to restrict the activities of any priest to protect children.

When I first say the title to the video, I thought it must be some kind of sick mistake, but it seems that the Catholic Church is convinced that resorting to homophobia will deflect from the fact that they have repeatedly failed in their responsibilities, and broke their social contract with all of the parishioners who placed faith in the institution.

There is no evidence that homosexuality and pedophilia are linked. Though Bertone claimed that psychologists and psychiatrists had proven that the two are indeed linked, that he did not list any names, or qualify where this supposed research came from.  Pedophile priests exist in the Catholic church because pedophiles exist in the larger society.

Bertone’s statements are absolutely reprehensible and follows in a long history of the Vatican demonizing gays and lesbians.  What is holy about encouraging the hatred of a specific group to deflect taking responsibility for the years of abuse, while acting to protect financial assets?  Even if the pope were to genuflect in front of every single person that has been abused throughout the numerous years, that would not even begin to come close to making amends for the heinous acts of the Church.

As the scandal rises, I cannot help but think of the Indigenous citizens who were forced to attend residential schools here in Canada and the way in which the Church and the government were allowed to buy their way out of responsibility with blood money and an apology.  Where was the universal denouncement of the Church’s activities then?  How did it even seem likely that priests limited their action to the Indigenous population?  There was no uproar when the victims were Brown, but now that it extends beyond a marginalized group, suddenly people care.

I cannot help but notice that Catholicism is growing in Africa and wonder what this will mean to the Black and Brown babies living there.   Will we turn away, as we did when First Nations citizens were being abused?  Unless the West has been able to benefit through colonialism, the suffering of Africans has been ignored.

What more evidence do people need to see the perversion that this Church really is?  There is a history of abuse, lies, and obfuscation to protect power.  The Church routinely engages in homophobia and transphobia.  It actively works to curtail women's reproductive rights, with its outdated teachings on abstinence and abortion.   There is nothing Godly or humane in either its teachings or practice.

The Church is absolutely aware that the sex abuse scandals are indefensible and this is why it has resorted to homophobia.  It is counting on peoples desire to maintain heterosexual privilege to avoid accepting responsibility for supporting years of abuse.  This in my mind is an admission of guilt and each time money is given in support of Catholic Church, without an outright change in doctrine, you should be aware of what you are supporting.  Is this really what Jesus would have wanted?