When you Transgress the Gender Binary

The following images appeared at Bossip. 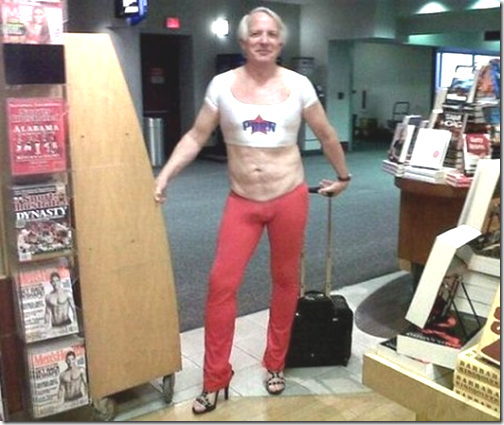 Boy, we tell ya! We spotted this picture and thought it couldn’t get any worser...until we spotted the one below of him turned around!!! The sole purpose of posting these images was to hold this man up to ridicule and the Bossip commenters did not disappoint.

Socially we are very invested in maintaining the gender binary and the moment someone does not perform gender to match the constructed norms they are disciplined.  How does this man posing for a picture really become threatening, unless we have decided that certain bodies are abnormal specifically to maintain underserved privileges?

Gender is something that is a concern for everyone because we are all disciplined.  Women can be attacked for not being suitably feminine, gay men are called swishy and effeminate, the trans community faces various marginalizations including but not limited to discrimination in employment and housing, and even heterosexual cisgender men can quickly find themselves the center of ridicule, the moment they admit they are not he-men.

We spread the social lie that everyone is allowed to pursue happiness as long as it is not damaging to others, but clearly this is not the case.   Even though we know that the gender binary is a false construct and damaging to so many people, we continue to perpetuate it in many aspects of life.

Gender continues to be a very important area to organize around, specifically because it effects millions of people across the globe everyday. And when we ignore it’s significance because it may not seem readily apparent, we set the stage for our own maginalization.  The category of male and female are not nearly as opposite as we tend to believe, and in fact whether cisgender or not, each day we perform actions that are perceived as belonging to the opposite gender.  If you are a man cooking dinner or a woman using a drill, you are guilty of breaking the gender binary.

Life is about performance far more than we realize, and it is only very young children, who actually have the true capacity to simply exist outside of these very specific roles.  No matter how progressive we may believe that we are, social pressure works to cause conformity even when it is not in our best interests.  Consider the recent furor because Monique went to a formal affair without shaving her legs. It’s about more than body hair; this incident was about what is understood as an authentically female body.

Each time we reinforce gender as something that is biologically determined, rather than something that is socially constructed, we ensure that at some point we too will be stigmatized.  If one happens to be cigender, heterosexual and male such stigmatization may not end in death, but for many other people, it can at a very minimum lead to violence and often to death.  Many trans women know this experience first hand from facing attacks after being read as trans.

Someone transgressing the gender binary does not pose a threat to the individual, rather they pose a threat to a limiting and harmful construct.  When we attack, not only are we affirming the gender binary, but solidifying the hierarchal structure of our society.  The value of a person can not and should not be based upon an artificial performance, but rather what they contribute to society.  When we attack viscerally, as the Bossip commenters did, we are doing as much harm to ourselves as the victim of our vitriolic hate speech.