Apparently Race is not an Issue for the Young

I was sent the following video regarding the Sandra Bullock adoption.  I would like to focus on the issues brought up by Marie Walsh .

And thank goodness these liberal, wealthy progressive people are able to take any child in need an shower them with love.  And I think race should really only be examined if you’re over 40 you need to think about how you think about race, because the younger generation doesn’t see race the way perhaps my generation of older did.  We live in a global world where we have a bi-racial president.  Where some of the most famous and wealthy celebrities in the world are people of colour..Ummm you know I am happen to have bi-racial children they don’t self identify as Black or White.

Whether or not Ms. Walsh’s children identify as Black or White, is not the issue -- because bi-racial children identify in various ways.  My son, who is also mixed identifies as brown and that has not saved him from repeatedly having to deal with racism.  This kind of utopian view to how race effects children can only be believed by White liberals because they have no idea of what it is too really deal with racism first hand.

The idea that Barack Obama can be held up as some sort of symbol of a new world is ridiculous, when we look at how many attacks Barack and his family have undergone, simply based of race.   Before any other candidate got secret service protection during the election Obama had to get protection because of the high amount of death threats.

Also, has this woman never heard of hipster racism, wherein ironic racism has become a major part of their identity? Hipsters regularly engage in racism while claiming to be above it all and post racial.  Race is an issue at any age because all of the agents of socialization continue to present the divide.  When children go to school and learn that White people are the only ones who did anything historically important, how is that not actively teaching children racism?  When they turn on the television and see that White people are everywhere, whereas; POC are relegated to specific roles that are necessarily degrading, how is that not actively teaching them racism?  When parents actively have to struggle to find books that have good representations of POC, how is that not affirming racism?

The fact that POC routinely have to present these arguments to so-called White liberals, is indeed evidence that the world is not post racial.  Instead of listening to what we have to say they continue to live in their beautiful utopia, because they know they will never have to deal with the fall out of their privilege and their ignorance.

I understand what you are saying Ms Rawlings about zip code being important.  If you live in a homogenous place your, you’re going to have to make some life changes to make sure that your child is exposed to some kind of diversity.  I’ve moved around the world with my children actually and we live in two homogenous places.  One happened to be Boca Raton Florida where they went to a small little Lutheran school and I felt that my family was more of a welcome curiosity.  Everyone was very kind to us and I loved it.  The other place was Florence, Italy by the way, very homogenous where only the African street merchants had not problems but a lot of greet curiosity.  Where did you get that Black baby they would say to me, thinking that I had adopted them.  But I really think that if you live in a zip code that is very diverse I live in Venice Beach California which we call Berkeley on the beach, so my kids have bi-racial friends. 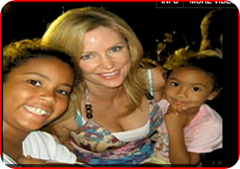 A welcome curiosity is not a good thing for Black children.  It places the child in the position of always having to explain their identity to others.  You will also note that she loved it, but the larger question is did her children love being centered out for being different?  Were the questions and situations they faced really benign? I was raised in a Black family, and grew up in neighbourhood that was largely Greek and Italian, and I can tell you first hand that being the only Black child in a classroom is not easy at all.

I also think that it is quite telling that Walsh felt that moving to an area where her children only saw Blacks as street merchants was a good thing.  Of course, homogenous for her meant largely White, and therefore; never making herself a true minority.  How different of an experience would it have been for her children had they lived in the Caribbean where the doctors, lawyers, police officers, fire fighters, teachers etc., are all Black?  What would it have meant to them to turn on the television at night to see Black faces informing them about the news?  The choices we make have a huge impact on how our children understand the world. If Ms. Walsh believes that we are post- racial, and that it is okay for her children to be thought of as “a curiosity”, it reveals a lack of understanding of the ways in which race continues to stigmatize children of colour.

Each time I have written about the dynamics in inter-racial adoption, I have been inundated with hate letters calling me a racist or a separatist, but never do White people readily acknowledge the damage that they do to our children. Adopting Black children makes them liberal, and that is the narrative we are all supposed to accept and believe, even as these very same children are learning to internalize Whiteness as good.

I believe in inter-racial families and in fact I am a part of one, but if the White parent involved is completely ignorant of race an refuses to acknowledge the ways in which it will be an issue for hir child, problems can and will arise from this.  One cannot assume that just because someone loves a person of a different race, that they are open to challenging privilege and deconstructing race, and Ms. Walsh stands of living proof of this.  Your children are not your liberal credential card Ms.Walsh.

Finally, shame on CNN and Don Lemmon  (this hurts me Don, but truth is the truth)  Having a White woman come on the air to lecture a Black woman about how the world is not really racist, only props up the idea that the experiences of WOC are irrelevant.  The fact that this a Black man was doing this, does not lessen the impact of the silencing that occurred.  You know damn well that race is an issue Don, because I have watched you check your colleagues on air. Simply because you worry about what alternative these kids will have if they are not adopted by these faux liberals, is no reason to sit there and let Walsh blather on about a non existent post-racist world.

If we are going to continue to have these conversations about race and families, we need to be honest about the White supremacist state and how it really effects children.