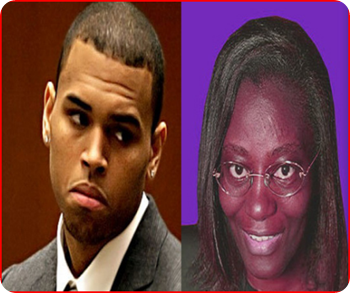 Quite honestly, I had no idea who the hell Chris Brown was before he decided to beat Rihanna to a pulp.  Since then, between seeing his new age Ike Turner woman beating face on various programs, I have read stories about him whining that his new album is not taking off, and that people are not forgiving him. Considering that he is such a douche, it is hardly surprising that the public continues to fail to support his trifling ass.  He has become the poster child for the face of Black masculinity that we would like to pretend does not exist.

It seems that blogger Sandra Rose was critical of him and being a pathetic whining baby grown ass man, he had to take his grievances to twitter. 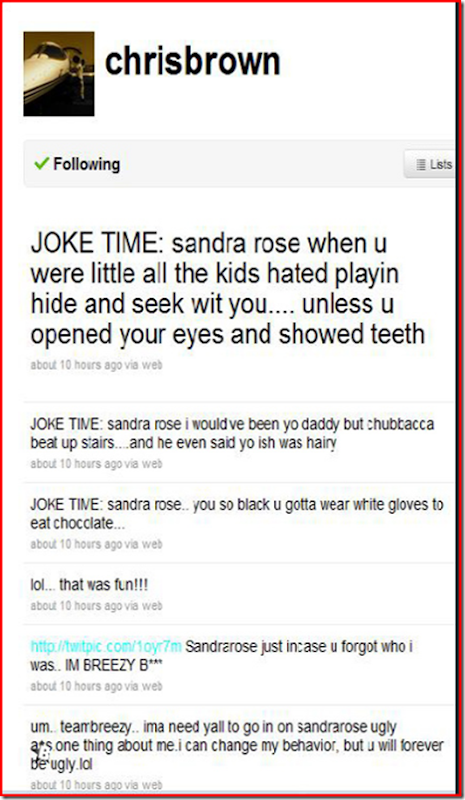 Brown claims that he is able to change his behaviour, but clearly from the heinous tweets that he decided to aim at Sandra Rose, he has not yet attempted to deal with his issues.

Since Brown decided to beat up Rihanna, it became clear to the world that he was no friend to women, and his tweets reveal another dimension to his hatred – hueism.

Deciding to attack Rose because she is darker skinned than he is reveals a very determined hatred of Blackness. And while these tweets are coming from Brown, the kind of attack that he launched at Rose are examples of what dark skinned women have faced for centuries.

Dark is still understood by many members of the African-American community to be decidedly unattractive and that is because they have internalized Whiteness as the ultimate good. Brown has what Malcolm X would term the slave mentality.  He still seeks the approval of Whiteness and this is specifically what makes his mind colonized.

His commentary also has an element of sexism.  Rather than dealing with the criticism that Rose has directed at him, he sought to silence her by calling her ugly.   In his mind, a woman only has value when she matches a constructed physical ideal.  It is sexist to believe that you don’t have to deal with someone’s allegations because you believe that you are better than her based in gender.

Brown may only be 21 years old, but he has already become a symbol of much that is wrong with Black masculinity.  The devaluation of women, physical violence, and hatred of his black self reveal a mind that is truly troubled.  It may be tempting to throw him by the wayside because of his vile behaviour; however, what we should be doing is trying to understand how it is that man that grew in a home watching a woman being abused became an oppressor of Black women.  We must learn from Chris Brown in order to prevent this sort of behaviour and mental state with our Black sons.

We cannot afford to lose our Black sons to this kind hatred and anger.  Instead of hating the forces that created the negative circumstances in which he grew, he aimed his rage right back at those that would love him and support him.  Chris Brown is exactly what society created him to be and we all need to take ownership of him.  He is the ugly side of Black masculinity that we would like to pretend does not exist, but we must shed  light on his actions in order to save those that come behind him.  Brown has stated on numerous occasions that he would like to be a role model and his behaviour does not exclude him from this role, because he can now teach young Black boys exactly what not to be.