Directing Racism at the Obamas Cannot be Defended as Satire

The Smithtown Messenger on Long Island clearly does not know the difference between racism and satire.  They printed the following before and after images in their publication. 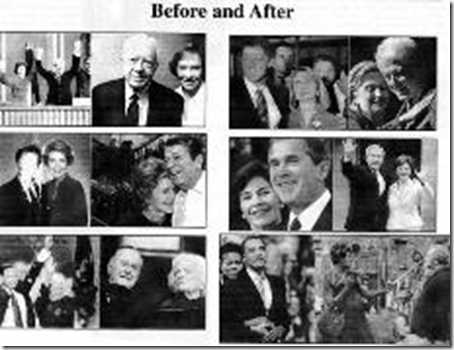 The image includes the Bushes (both JR and Sr), Clintons, Reagans, Carters and the Obamas.  All of the other couples have before and after pictures but the Obamas are paired with  Redd Foxx as Fred Sanford and LaWanda Page as Sanford's sister-in-law, Aunt Esther.

Phillip Sciarello, publisher and part owner of the Smithtown Messenger on Long Island, defended the decision to publish the photo, but added the newspaper would run a retraction in its next edition for anyone who might have been offended. (source)

This image is not political satire.  If a political statement was intended, each set of presidential couples would have a similar photo-- but the fact that the Obamas were the only ones attacked is one just one of the reasons why this collage is racist.

Satire is often used as an excuse to engage in outright racism and when marginalized people rightfully take offense, we are being too sensitive, or can’t take a joke.  Obama like every other president is not perfect.  His administration has made plenty of mistakes that can be rightfully criticized, but using race to express political discontent simply reaffirms undeserved White privilege.

This is the part where racists usually argue that there are images depicting George Bush as a monkey, and that this falls under the same heading; however, Bush’s Whiteness means that the image does not carry the same weight.  Whenever you seek to criticise someone, you cannot divorce them from the historical context of how their race, class, gender, sexuality and able-bodied status has been understood. This is why images like above fail, they do not consider the ways in which racism continues to plague Blacks.

The fact that the publisher is only willing to apologize to those they “might have offended,” instead of admitting that what they did was offensive, illustrates a refusal to understand their role in perpetuating racism.  Just as “The New Yorker” defended their actions when they put a racist image of the Obamas on their cover, satire is once again being used by the media to perpetuate White Supremacy.  How can people honestly claim to be colour blind, or even post racial, when major agents of socialization have completed invested themselves in ensuring that Blacks continue to be understood as second class citizens?