Two Black women were denied jobs at Six Flags because they have dreadlocks.  Apparently, it is against the company’s appearance standards, even though such a policy is clearly discriminatory. In the interest of full disclosure: I had dreadlocks for almost ten years, before cutting them off recently.

It is interesting that six flags is more than happy to take money from people who have dreadlocks, but cannot employ them.  Time and time again, large corporations are more than willing to take Black people’s money, while refusing to hire them.  Burlington Coat Factory  and Six Flags are just two examples of this phenomenon. At the Pen Center, a mall not far from where I live, outside of the food court, you will find no people of colour employed, and yet we certainly live in the community.

There is always a reason why we are deemed unemployable, but when a company can site appearance standards and say that a hairstyle is extreme, Whiteness is very quick to defend the corporation. You see, natural Black hair has always been politicized by Whiteness, because it indicates a failure to conform and a distinct pride in that which is authentically Black.  You will note, that no White hairstyle is viewed to be political.  Dreadlocks can also indicate a religious choice and by banning them in the workplace, one is impeding upon the practice of Rastafarianism. 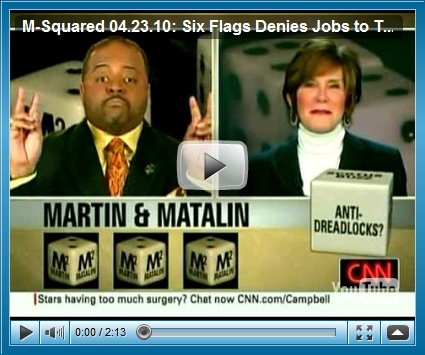 Of course, White people could not wait to inform Blacks about our culture.

Mary Matlin: That’s the thing. I think that it is the hairdo of choice for musicians or it’s not a racially insensitive thing.  You guys wanna find, you’re always finding – I know that we have had this kind of conversation before but there is not insensitivity in everything, some things are…

Roland Martin: No not everything but if there is a particular hairstyle that is worn by a certain group of people – I’m still trying to figure out what is the big deal?  I don’t see it as an issue.  I think six flags going overboard saying you can’t have dreadlocks.  If you want the money of people who have dreadlocks but then you say you can’t wear them, to me that’s nonsense.

Obviously, if these women are wearing dreadlocks, it is because it is their hairdo of choice.  Furthermore, how dare Mary Matlin sit there with all of her White privilege, on national television and complain because Blacks have the nerve to demand justice.   I would also like to know, exactly how it is that a White woman who has never experienced racism, can decide that something isn’t racist?  Matlin managed to do a lot of racefail in just a few seconds didn’t she?

If dreadlocks have been politicized, it is because Whiteness has made it so.  Constantly policing Black bodies is indeed racism, and it is something that happens everyday.  What should matter is whether or not these women are capable of doing their job not their dreadlocks.