I don’t watch “Dancing With the Stars,” but I do watch The View”.   Most of the time Elizabeth’s commentary is enough to make me want to push a mute button.  I know that a broken clock is right twice a day, but Elisabeth seems to be unable to even reach that level.

Erin Andrews just went through a terrible ordeal in which unbeknownst to her, a man video tapped her naked through a peep hole, and then attempted to sell the video. When celebrity sites refuse to pay for his illegally obtained video, he put them on Youtube. He actually stalked her for quite some time as well.   This was a complete invasion of privacy and there is nothing that she could have done to provoke this kind of behaviour; however, in true Elizabeth fashion, the victim blaming came pouring out of her mouth. 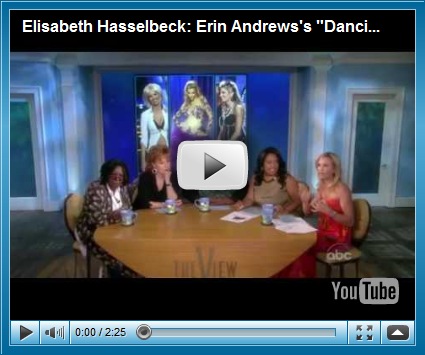 She is not on dancing with the starts. still there dancing; however for the last three weeks she’s been wearing like next to nothing.  Okay, so she’s come in and I think in the light of what happened and as illegal and inexcusable as it was for that horrific guy to go in and try to peep on her in her hotel room – I mean in some way if I’m him I’m like, man if I just could have waited twelve weeks and seen this a little bit less without the prison time, you know.

Elizabeth then stands up to reveal to the audience that her clothing is made up of vast material, after being questioned as to whether or not she is wearing less by Joy.

She may be a really nice person; I don’t know her.  I’m just thinking coming off of what just happened to her and this guy seeing her and making it seem she was vulnerable as could be, I would think …she has the right, I’m just thinking wear the other costume.

Yes, I know that most of that was scattered, but remember who was speaking.  It seems to me that what Elizabeth is suggesting, is that if Erin Andrews would only just dress modestly, no one would want to attack her.   It’s not like the real reason for these kinds of violations against women have anything to do with power or anything.   There is a reason that rape still happens to women that wear a niqab.  These kinds of violations are never about sex.  Sex is only the manifestation of a desire to hurt, shame, and overpower. It is never about what a woman is wearing, drinking, if she is out after dark, or alone with a man.  If man has determined that he will violate a woman, none of her actions will matter.

Not to worry folks, “The View’s” resident bimbette learned her lesson and issued a teary apology the next day. 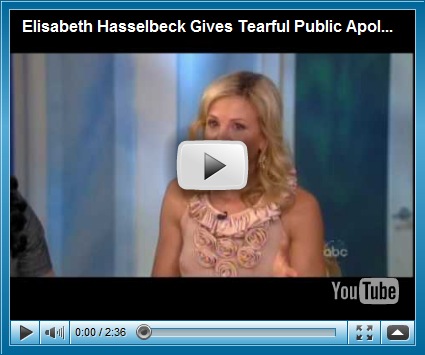 Yesterday when we were talking about Erin, even though I was focused on the detestable criminal who is behind bars thankfully, who has really  made her life a living hell, umm  and is in jail, umm I ended up hurting her. And so I told Grace, Grace mommy feels really bad cause I hurt somebody.  So I took out her little devotional that we read, and I read her mommy always read you reckless words pierce someone’s heart like a sword, and I told her, and I promised her that I would use my words more mindfully; like I try to do to build people up not break them down. Thankfully she is five and so cute and she said to me, “Mommy why don’t you just call Erin and tell her you’re sorry.”  So thankfully I listened to her she is a wise little girl and I did, so I’m really sorry and I wanted to offer that publicly  even though I did follow that advice.

Is it me, or did you get the sense that Elizabeth still did not understand  why what she said was wrong?  Yes, she slut shamed the woman, but she also victim blamed and that is very dangerous, in a world where people think that women cannot be raped when they wear skinny jeans.  The category of who can be a victim is continually being narrowed by patriarchy, and this means that each day women become more vulnerable.  When we put the onus on women to prevent an assault or in this case a clear invasion of privacy, it removes the responsibility from the offender.  It further sets up a world in which women are always being policed and their behaviour suspect.

It is troubling that socially a woman is only believed when she says yes to a sexual advance and a negative answer is always up to debate.  The acceptance of an affirmative answer is easy for patriarchy to accept because it benefits men, and this is why agency is only ever deemed acceptable when it is clear that a man can profit in some way.   Further, as Elizabeth has shown, women help to sustain a world in which they are forever prey by refusing to support each other on key issues.   Powerful groups are always supportive of margainalized bodies who are willing to be a tool of their own oppression, or as I like to label these women colluders.  What Hasselbeck fails to realize, is that one day that very same argument could be used against her.  She did not just hurt one woman, she hurt all women with her statements.  She particularly attacked all women that have been victims to stalking, male violence, and rape.  And so, while it is great that she apologized to Erin, until she can acknowledge how her comments played into a larger narrative that continues to create women’s bodies as always available, she remains a part of the problem.