Since Gabourey received international attention by staring in the movie “Precious,” the media has not tired of disciplining this woman.  She is too fat, too black, and too happy, for people to accept.  Doesn't she know that women like her are supposed to be hiding in their apartments with only the company of cats?

Fishbowl DC is just the latest outfit to try on the shame shoes. 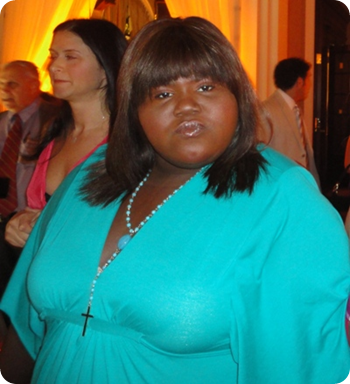 So, who was the weekend's biggest (no pun intended) disappointment so far? FishbowlDC heard the same complaint throughout last night: Gabourey "Gabby" Sidibe, star of 'Precious' was "not so precious at all," "anything but precious" and some comments were less complimentary than that.

When asked for a picture, the less-than-enthused newbie star could barely crack a smile. One photo-seeking fan said jokingly, "that's all you're going to give me," to the pouty Precious. Gabby responded, "you'll get what I give you."

Note to Gabby: You're already 5 into your 15 minutes of fame so simmer down.

So here we go again, a man wants a woman to smile because it would make him happy, and of course there is something wrong with her for failing to instantly comply.  Nothing is said about the fact that he seems to think that he has the right to force someone to perform like a trained seal, ‘cause that is what good girls apparently do.

I get that Gabby is a celeb, but she is also a person -- and if she does not feel like putting a fake ass smile on her face to satisfy some guy, that is just fine.  Too often men will expect women to hide their feelings and become little automatons, because it makes them happy --never mind that it may be in direct conflict of how we are currently feeling.   This is not a celeb thing, this is a woman thing.  I have been told on more than one occasion that I should smile and all it inspires me to do is give the person the finger. You know, if I felt like smiling, I would smile.

Gabby’s celebrity status does not give some strange man, that she is never going to see again, the right to stroll in and expect a performance.  This is about gender and power and the failure to acknowledge this is reflective of the ways in which we often ignore the social discipline that is aimed at us every day.  Someone could look at this  and say, what’s the big deal, it’s just a smile – but that little smile is just one of multiple tasks that women are expected to perform by patriarchy.

We claim that women are more emotional than men when the truth is, women are allowed to show one emotion, and that is stepford like happiness.  We cannot be left alone to cry in peace, should the urge strike us, nor can we lash out in anger, because a perfect woman is the picture of serenity and calm --never mind that it may take drugs to achieve this.

If Gabby is irritable, it is her right to be so and she should not have to “calm down”, be quiet, or perform.  It is also presumptuous to suggest her career is nearing its end, when she just did an amazing job on Saturday Night Live.  Gabby is riding high and going strong, and I think the issue is that society expects women, especially fat Black women like Gabby to behave a certain way.  I say kudos to Gabby for being just who she is, and if the world does not like it, they are welcome to bugger the hell off.  It’s about time women be allowed the autonomy to be individuals. I am far more thrilled by her failure to perform, than I would have been to see another faux smile on a woman who just wasn’t to it.

H/T (not) Happy About This