Kangaroo Says Let’s Get It In

About once a day I browse Jezebel.  When I came upon this story over there I simply had to share it.  Apparently, there is a kangaroo in the Northern Territory of Australia, who has set his heart and frankly other body parts on getting his groove on. 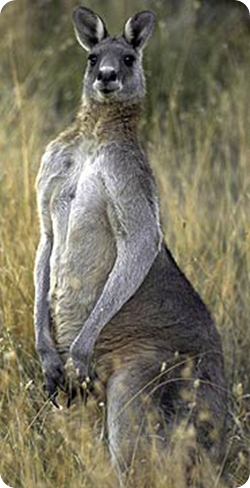 One woman recounted her terror when the kangaroo, which she said was obviously aroused, followed her as she went for a morning walk along a bike track.

Realising that she was being followed, the woman turned around and found the lovelorn animal staring at her.

“I turned around and saw this big kangaroo behind me, so I hastened my steps,” the woman told the Northern Territory News.

“It seemed a bit odd, but I continued walking and didn’t think much about it. On my return walk he was there waiting for me. With his male pride on full alert, he started circling me.

“There was no doubt about what he wanted, the randy old thing. It was a huge kangaroo and quite intimidating.”

The woman said that she tried to shoo the kangaroo away “to show him I wasn’t interested, but he was persistent”. He eventually bounded off when other walkers approached.

Later that day a mother of three encountered the kangaroo at a night-time speedway meeting, while a man said that he challenged the intimidating macropod and came off second best, receiving a swift punch in response.

Randy thing indeed, though I can imagine that for the women involved this must have been quite the terrifying experience, I have to giggle at the man in question being bested when he tried to defend his lady’s honour.

This is the natural consequence of encroaching on an animals territory.  Unless its deer quietly playing in our backyards (note: North American perspective) we tend to see animals as invading our spaces.  We call them nuisances because their existence impedes our way of life. As we continue to demand more and more space, our interactions will increase and unfortunately it will be animals who pay the consequence.

What this story should teach us is that other than finding room in our hearts for domesticated animals like dogs and cats,  we need to find a way to co-exist with animals.   It is humanity that is the invasion force and they are just doing what comes naturally to them.