“Modeling Sucks: Or How I met Colin Powell and Other World Leaders” By Kola Boof 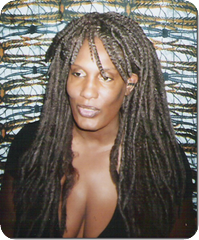 Egyptian-Sudanese-American novelist and poet Kola Boof has been an agent for Sudan’s SPLA and was the National Chairwoman of the U.S. Branch of the Sudanese Sensitization Peace Project.  She has written for television and her many books include, “Flesh and the Devil,” “Long Train to the Redeeming Sin,” “Nile River Woman” and “Virgins In the Beehive.”  She blogs at Kola Boof. com
Modeling sucks if you’re a hyper-intelligent woman. But we’ll go deeper with that in a minute.  First—I want to share with you some really funny shit.
I was twenty-four and relatively “dumb” when this happened. You must picture Tel Aviv, Israel circa 1994; seaside resort for the jet set, totally secular—Israel’s young and rich; the happy and the sinful.  A forty-something gay male friend (and Sissy Spacek look-alike) who we’ll call “Swan” had rescued me from being an older man’s mistress in Fairfax, Virginia and taken me across the ocean to Israel with the bright idea that me being over six foot tall and slender with an angular face would instantly translate into Naomi Campbell’s millions as a supermodel. Swan knew a Jewish photographer in Israel and both were comfortable in that culture, so off to Israel I went. The photographer indeed trained me, bedded me! (haha), sent me on “go-sees” and got me steady work as a pose model. But my dearly beloved Swan turned out to be a lot more adventurous and dangerous than anyone could have predicted.  He almost got the both of us put in prison for life!
Using the money of some rich old Jewish politician, Swan opened an “exotic eatery” called “WHO’S GAME” where we served ultra-expensive delicacy meats such as kangaroo, antelope, elk, boa constrictor, cobra, ostrich, wallaby and crocodile—Swan cooking and me playing the glamorous, charming hostess.  I swear on a stack of Bibles…I never knew that we were actually serving chicken thighs, white-dyed chicken thighs and more chicken thighs with egg plant pieces, different sauces and food colorings dribbled over it to make it seem like exotic game meats.
The authorities arrived one day and arrested Swan.  Not only was he high on marijuana and face beat (meaning made up a like woman; androgyny) when they busted in the place—but he tried to deny that the highly expensive plates warming over rock-fire grills were nothing more than cheap chicken cuts.  He insisted it was real exotic game meat and I had no reason not to defend him, to insist right along with him.
“This is no crocodile and bison!” hollered the police. “The shit tastes like chicken…and it is chicken! Arrest them both!”