I have not done a weekly breakdown of “Lost” because it is well done by many other blogs.  In fact, you may have noticed that on Wednesday’s the content might be a bit light occasionally, and that is because I spend far too much time at Shakesville breaking down the last episode to its most minute detail.  Yes, I am on one of those “Lost” junkies.  With the show ending, I have to say that I am really going to miss it.  I have been actively thinking about a replacement but nothing has come close to “Lost” so far,  though I have been enjoying shows like “V” and “Flash Forward”

I just found out that there will be an auction this summer of “Lost” memorabilia.  Though I am sure it will all run right out of my price range, there are a few things I wouldn’t mind having.  Yes, I know I need help, but, but, but, it’s “Lost.” 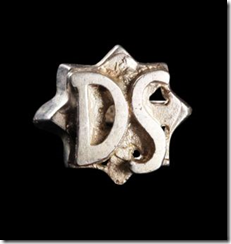 The ring, featuring the initials "DS" and is worn by Charlie on his ring middle finger, is a Pace family heirloom.  It bears the initials of Dexter Stratton, Charlie's great-grandfather.  It is passed down to Charlie's brother, Liam, first.  Liam, however, gives it to Charlie, who Liam deems more of a family man and has a better chance of passing the ring along to an heir.  (Ironically it is Liam who settles down and has a daughter.)  Before embarking on his fatal mission to the Looking Glass, Charlie leaves the ring in Aaron's crib, passing the ring on to the infant who in their short time together on the Island had become something of an adopted son to Charlie. 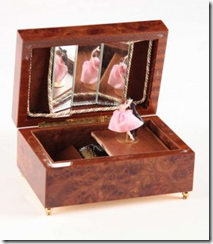 Rousseau's music box is an ornate mechanical musical box with a hinge lid that when opened plays the song, "Intermezzo" from Carmen (Georges Bizet, 1875).  There is a small dancing pair that twirls around in the center.  The box is given to Danielle Rousseau by her lover, Robert -- Alex's biological father.  When the music box is first seen it has been broken for a long time, yet it has also comforted Rousseau during her time of solitude on the Island.  After being held captive by Rousseau, Sayid manages to fix the box, much to Rousseau's delight.  In a time flash sequence, a young Rousseau is clutching the music box on a raft while her crew mates rescues Jin at sea in 1988. 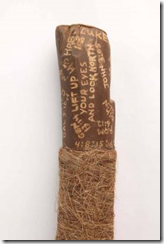 Eko's stick is Mr. Eko's signature prop, nicknamed the "Jesus stick" by Charlie and called a prayer stick by Locke.  Eko makes his staff from a branch he broke off on the beach, carving into it various Bible scriptures (book, chapter, and sometimes verse), a small cross, and the Numbers.  When asked by Claire what he was carving, Eko answers, "Things I need to remember." 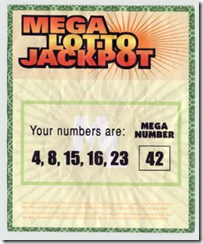 The winning $114 million Mega Lotto Jackpot ticket with the numbers 4, 8, 15, 16, 23 and mega number 42 -- numbers that recur throughout the series.  Hurley buys the ticket while still working for Mr. Clucks.  But rather than being happy with winning the lottery, Hurley considers it a curse and fears that his life will change.  Seeing the numbers again on the Island only confirms what Hurley believes: that his life is plagued by an unexplainable curse. 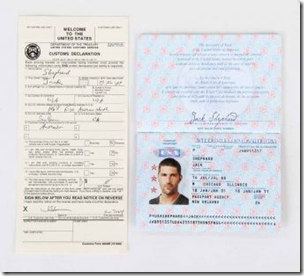 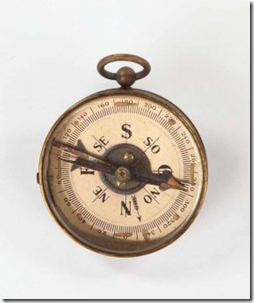 Compass given by Richard Alpert to Locke during a time shift sequence, so that Richard will believe Locke if they meet in the past.  When Locke time-shifted to 1954, he gives Richard the same compass, thereby earning his trust.  In 2007, Jacob's nemesis, posing as Locke, gives Richard the compass and instructs him to give it to Locke, creating a self-containing paradoxical time-loop. 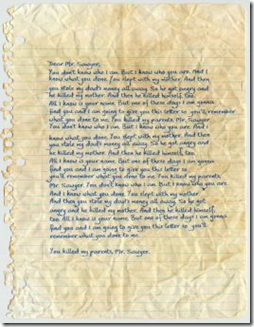 Penned in 1976 by an 8-year-old James Ford on a torn-off lined notebook paper during his parents' funeral, this letter is addressed to "Mr. Sawyer," the man who Sawyer deems responsible for his parents' deaths.  The letter reads, in part:  "All I know is your name. But one of these days I'm going to find you and I'm going to give you this letter so you'll remember what you done to me. You killed my parents, Mr. Sawyer."  At the age of 19, James Ford takes up the name "Sawyer" and begins carrying the letter with him at all times in the event he ever meets the real Sawyer.  Includes the original letter-size envelope. 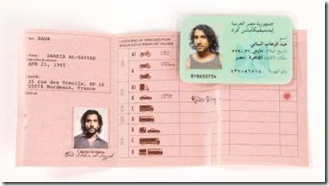 There are over 100 items on the auction list.  It’s enough to make a  true “Lost” fan drool.  Above are the items that interested me the most, but I could not help but notice that a few things were missing, for instance where is Richard’s necklace?  Where is the dagger that was given to Sayid to stab the man in black?

What “Lost” item would you like to own and what item do you think really should have been on the list?