Monstrous Musings: Got Vampire Privilege?: The Whiteness of Twilight 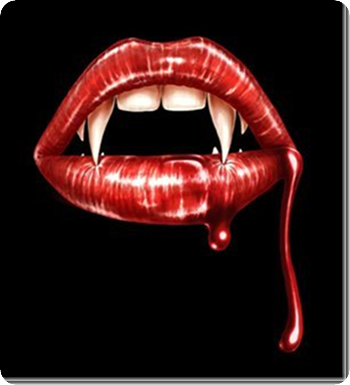 The following is the second part of a piece posted two weeks ago.   Part 1 can be found here.

In addition to its depictions of the Quileute characters as literally and figuratively darker and more animalistic, the Twilight series also features many characters whose villainy is either associated with non-white skin and/or their black hair and clothing.

Laurent, for example, is described as having olive skin and glossy black hair in the books and is played by a black actor in the films. The evil Volturi, their name redolent of black vultures, are repeatedly associated with their long black capes and “dark ruby eyes”.

Even the raced vampire allies are portrayed as more savage than their white counterparts. The animal-skin wearing Amazonian vampires are depicted as “feline” with “long black braids.” Bella observes “It wasn’t just their eccentric clothes that made them seem wild but everything about them” Noting their “restless” “darting movements,” and “fierce appearance,” she relates, “I’d never met any vampires less civilized” .

The Brazilian workers featured in Breaking Dawn are similarly associated with darkness. The “tiny coffee-skinned woman” with “dark eyes” is “superstitious” and speaks in what Bella describes as an “alien tongue”.

More explicit racialization occurs via the NA wolves depiction as less civilized than vampires. In Breaking Dawn, for example, the Cullens introduce “culture” to Jacob, inviting him into their home. Sleeping and eating outside at first, in various states of undress, he is gradually “civilized” and moves inside the house, or into the white world.

The term werewolf, literally meaning man-wolf, connotes beastliness and irrationality, attributes that were also associated with those “in need” of colonization. This man-wolf idea, as Meyer’s books show, lends itself well to the historical rep of Native Americans as a violent, savage people.

Indeed, violence is represented as genetic trait of the Quileute via the actions of Paul, Sam, and Jacob, a representation that glosses over the political reality that  native women experience domestic violence at higher rates than any other ethnic group and frames native men as predisposed to violence.

On the flipside of this ignoble savage representation is the noble savage (the native American as close to the land, spiritual, heroic, virtuous—and doomed). In Twilight, Jacob’s “good side” is often rendered in animal-like terms which present him not so much as a savage beast, but as a loyal dog. These depictions, despite having positive associations with “man’s best friend,” nevertheless portray Jacob and the wolves as more animal-like than human, a portrayal that has historically been used in relation to Native Americans.

Tellingly, when Edward is associated with animality, he is characterized as a lion, the king of the jungle - Jacob, on the other hand, is depicted as a loyal dog, a savage wolf, and, at one point, a sure-footed mountain goat. He is the ignoble savage that forces himself on Bella – a younger Sam who, we are encouraged to think, might just leave Bella’s face scarred like Emily’s. Yet, lest this violent representation smack too much of racism, he is domesticated in the texts – rendered into a nice puppy dog for Bella to pet. (Tellingly, Bella admits she likes Jacob MORE in wolf form when she can be his metaphorical human master, patting his soft fur and reveling in his expressive wolf eyes that are so much more palatable to her than when he is human and can talk!)

She, as future vampire, tames his wolfishness, preparing him to enter the Cullen world – first via being allowed into their house, then dressed in “civilized” clothes, then ultimately made a family member through his imprinting on Renesmee. Not only is he colonized by these vampires, he now has godly Edward as a father. What a nice little assimilationist fairy tale…

Edward’s mind versus Jacob’s body, or, Twilight as a Colonial Text

Twilight can be read as upholding traditional ideas of mind versus body and culture versus nature. Edward (and the Cullens) are associated with the mind/culture, while Jacob, the Quileute, the wolves, and other raced characters are associated with body/nature.

Edward has various graduate degrees, is well-spoken and well-read, and is distanced from his ice-cold body. As a mind reader, he lives not only through his own mind, but by reading the thoughts of others. Jacob, in contrast, is grounded in corporeality – his bodily size, color, and temperature are constantly focused on in the books. Further, as a werewolf, Jacob and other Quileute characters are associated with the unruly body.

Their bodies run hot and their physical anger cannot be contained. More generally, the werewolves’ lack of clothing emphasizes their status as bodies.

The sexualization of the wolf body further highlights the body/mind binary the series enacts. Echoing traditional representations of colonized peoples Jacob (and the other wolves) are perpetually in a state of undress. This, too, is in keeping with historical representations. As Peter van Lent argues in “Her Beautiful Savage,” sexuality pervaded captivity narratives with native men framed as dangerous, yet desirable.

Analyzing the popularity of “Indian Romances,” van Lent suggests that turning the native male into a romantic hero renders his supposed violence sexy and ameliorates the history of colonization. “Loving him,” van Lent writes, “a minority and a victim of much we regret—makes American dominant culture feel less guilty.”

Taylor Lautner and his packing on of 30 pounds of muscle in the space of one month might be read in this context. Moreover, the fact he is only “playing native”  underscores the fact that real life indigenous males cannot live up to their media representations – instead, as Lautner’s casting portends, non-natives are “better” at being native than real natives1

Taken together, these representations in Twilight communicate to readers rather disturbing messages about race. In particular, Jacob’s character  perpetuates the dominant racial ideology which constructs the indigenous as “Other.”

Jacob, as a stereotypical “good Indian” tells Bella his cultural “legends” but does not place much stock in them, characterizing Quileutes as overly superstitious. Before his turn to wolf, he is very critical of the “La Push gang,” calling it a cult and mocking the fact they are “all about our land and tribe pride.” Referring to what is happening as “like a bad western”, Jacob has adopted a white, Westernized view of his culture and heritage.

When he asks Bella, “So do you think we’re a bunch of superstitious natives, or what?” with “a hint of worry” in his voice, he emphasizes his own fear that this is indeed the case. His westernized view, or colonial viewpoint, results in negative views of himself and other tribe members. His turn to wolf is redolent of forced colonization – a turn caused, significantly, by the presence of the white Cullen vampires.

And, while Jacob is especially reluctant to serve his wolf-mates and follow Sam’s orders, he, in keeping with the colonial viewpoint the text enacts, he seems happy to be at the beck and call of the white girl he has fallen in love with, reminding Bella, “I offered eternal servitude, remember, I’m your slave for life”

We might also read Jacob’s forced turn to wolf in relation to white conquest – he does not want to fight, to be an animal, but the Cullen intrusion forces him to do so. Yet, rather than a justified warrior hero, he is presented as “a monster who might hurt somebody.”

Compared to the high-culture Edward who, fittingly looks like a classically beautiful statue, Jacob is childlike, irrational, temperamental, impulsive, and beastly. Edward is a white vampire god – Jacob, in contrast, is a lowly teen wolf, with “russet-coloured” skin and anger management problems. He is framed as the real and more dangerous monster, just as men of color are framed as a danger to society, to their families, to themselves. Post-racial society my ass. More like “Twilight society” where white guys are the heroes, males of color are violent cads, white girls are desired booty, and women of color are victims. But it’s “just fiction” and “only entertainment” – kind of like the Western movies that gave us the enduring image of indigenous men as monstrous.

It’s not “just fantasy”: why Twilight’s representation of race matters

The contrasting depiction of Bella’s suitors, with the white vampire as gentleman-hero and the native werewolf as an aggressive cad, accords to racialized stereotypes of white versus non-white behaviour.

The fact that Bella chooses Edward over Jacob at the series close and that this choice is framed as a “happy ending” implies that what Edward represents – whiteness, civility, wealth, and intellect – is the better choice. Bella chooses the Cullen vampire life, a life that brings with it a knapsack full of privileges. This choice, read in the context of the racial ideologies that shape U.S. society, reinforces messages of white superiority.

Twilight needs to be examined in terms of the dominant ideology of race that shapes the U.S. culture. By perpetuating ideas of whites as civilized and indigenous people as savages, it naturalizes and perpetuates age-old racial divides. Such depictions, even when situated in a fantasy, contribute to dominant notions of race shaping U.S. culture.

We must remember that fantasies portrayed in media texts are often held up as ideal. Gunshot Westerns were largely fantasy too, and think of the lasting legacy they have left us with in terms of Native Americans being seen as angry warriors who scalp too often and drink too much.

Further, the fact that the series depicts a real group of indigenous people is problematic, especially given the failure to mention Native American realities of poverty, unemployment, high suicide rate, lack of access to healthcare and generalized social disenfranchisement.

Instead, Twilight relies on stereotypical representation of race, focuses on falsified legends, and leaves out any consideration of the lasting effects of colonization. As such, it serves the dominant ideology and undermines native sovereignty and cultural survival.

While the texts are indeed fictional, we cannot discount the power such fiction holds over our lives, over the socialization of young readers, and over our cultural constructions of race. Not all vampires (read: all white guys) are “godlike” and “angelic” and not all wolves (read: men of color) are testosterone fuelled beasties.