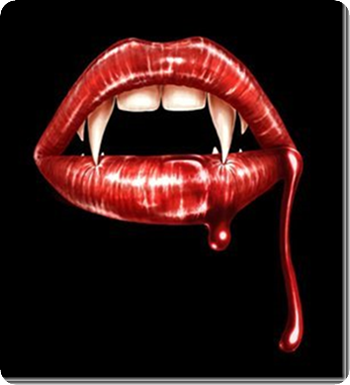 The notion of menstruation as monstrous is widely evident in contemporary culture. A quiz on ivillage, for example, supplies readers with eight questions to determine if they are “menstrual monsters,” noting that “It's amazing how even the sweetest, most well-balanced woman can turn into a swamp creature when she has her period.”

This conflation between menstruation and monstrosity has deep historical roots. Though menstruation was recently linked to zombies in relation to the commotion over Dakota Fanning’s period scene in The Runaways, the “curse” is much more pervasively linked to vampirism historically.

In the nineteenth century, for example, women were believed to become vampires in order to replace blood lost during menstruation. The vampire’s “kiss of blood is a weakening device” (according to Sue Ellen-Case*) that speaks to “male myths of menstruation, where a women’s monthly loss of blood was associated with their pale, weak image.”

Menstruation is also associated with another vampire symbol – the full moon. The Greek word for vampire is “sacromens,” meaning “flesh made by the moon,” and there is a long history of equating the monstrosity of the menstruating woman to the wily pull of a full moon. Lucy in Dracula is often read as a representation of the supposed insanity menstruation releases in women, of the notion that “Under the light of the moon this raging, hungry female force is released.” **

Barbara Creed reads the vampire legend as “a symbolic story about woman’s menstrual flow,”  referring to the vampire as “menstrual monster” while French Feminist Julia Kristeva traces the notion of female blood as impure to Leviticus, arguing that the bible’s framing of blood is utilized in order to construct woman as impure.***

We need look no further than one of the most popular contemporary vampire sagas – Twilight – to find modern links between menstruation and vampirism. And while Stephenie Meyer may not be conversant in French Feminism, she is certainly familiar with the bible. We might thus presume the simultaneous desire and disgust with blood that Twilight enacts issues at least in part from the teachings of Leviticus.

In the texts, Edward lusts after Bella’s blood, but he abstains from it – while the narrative frames this as his heroic refusal to kill Bella, we might also read it as a refusal to be defiled by her blood – a fluid that (as Midnight Sun makes especially clear) threatens to turn him into ravenous monster.

Bella, the heroine, fears blood – unable to even stand the smell or look of even a drop of it as revealed early in Twilight. Unlike Lucy of Dracula who becomes a blood-drinking child-murderer, Bella’s hatred and fear of blood frames her as able to overcome female monstrosity, allowing her to be transformed from not-quite-monster to perfect (immortal) mother.

As many readers have noted, Meyer’s saga fails to address what happens when Bella menstruates given that Edward is inexorably drawn to her blood. Perhaps blood is so defiling in the Twilight universe that menstruation is not allowed to sully its pages.

While Meyer shies away from dealing with the problem menstruating females would pose to her blood-addicted vampires, the link between menstruation and monstrosity is not only historically resonant, but infiltrates the contemporary imagination.

As Jessica Valenti explores in The Purity Myth, part of the fear and hatred of menstruation stems from the notion that females lose their “innocence” once they start menstruating – that vaginal bleeding represents the dawn of their existence as sexual creatures. Quipping “If being premenstrual is ‘innocence,’ does that make those of us with periods guilty?” Valenti’s work suggests the same thing as many vampire tales – that, yes, bleeding women are guilty – guilty of being sexual.

Part of the fetishizaton of purity contemporary society champions is about not wanting women to be adults. The onset of menstruation is read as the loss of girlhood and menstrual blood is thus a defiling and dangerous fluid that turns women into beasts (re: sexual females).

Perhaps this accounts for the turn of vampire from female to male in so many texts. While early lore often represented the blood-sucker as female, the Victorian age and our present moment tend to favor the vampire as male. Or, in an age particularly horrified by female sexuality – both the Victorian and our own - male monsters suck blood from females – draining them not only of their life-blood, but of their sexual power.

As Gloria Steinem indicated in her 1978 piece, menstruation would be a bragging right if it was a male bodily reality. However, since females are the ones with periods, the menstrual cycle is framed as dangerous – and particularly so to males. As Renee noted in a recent piece, we bleeding females are such a threat we are instructed to warn people by wearing period-announcing bracelets and t-shirts.

So, as Mary Elizabeth Williams writes at Salon, “though moviegoers will gladly make blockbusters of movies that feature rivers of gore ("Terminator Salvation": $120 million and counting), a little trickle from a girl's bathing suit area is an instant nightmare.” Thus, as I wrote about in this post, females are supposed to pretend as if periods don’t exist – or, if they MUST be acknowledged, to associate them with blue liquid and frolicking on the beach.

While ads put the reality of menstruation under erasure, fiction continues to play on the bleeding female nightmare, ushering in modern day Carrie White’s. Though Stephen King famously condemned Meyer as a hack – they do share at least one thing – both authors frame menstruation as true horror.

*”Tracking the Vampire,” Sue-Ellen Case, in Writing on the Body

**”‘Your Girls That You All Love Are Mine’: Dracula  and the Victorian Male Sexual Imagination,” Gail B. Griffin, in  Dracula: The Vampire and the Critics