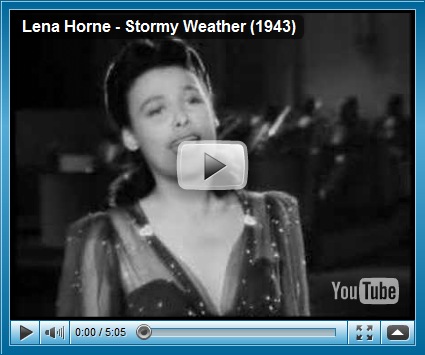 I was first introduced to Lena Horne on an episode of “The Cosby Show”.  I heard her beautiful voice and I simply had to know more about this Black siren.  Following her career would lead to a love of Jazz.

Lena was not only a magnificent leader, her politics were absolutely inspiring.  Though she was blacklisted listed for her views in the 50’s, Lena continued to work and fight for equality.

Horne was long involved with the Civil Rights movement. In 1941, she sang at Cafe Society and worked with Paul Robeson, a singer who also combated American racial discrimination. During World War II, when entertaining the troops for the USO, she refused to perform "for segregated audiences or for groups in which German POWs were seated in front of African American servicemen", according to her Kennedy Center biography. Since the US Army refused to allow integrated audiences, she wound up putting on a show for a mixed audience of black US soldiers and white German POWs. She was at an NAACP rally with Medgar Evers in Jackson, Mississippi, the weekend before Evers was assassinated. She also met President John F. Kennedy at the White House two days before he was assassinated. She was at the March on Washington and spoke and performed on behalf of the NAACP, SNCC and the National Council of Negro Women. She also worked with Eleanor Roosevelt to pass anti-lynching laws. She was a member of the prominent organization Delta Sigma Theta Sorority, Incorporated.

Horne had long moved past the derisive label of “Negro Cinderella” to become a true hero.   It was with great sadness that I read of her passing on Sunday night at New York-Presbyterian/Weill Cornell Medical Center in Manhattan.  Wherever she is today, I hope that she has left the Stormy Weather behind, because Lena truly deserves to have the sun shine on her.