The following is a flash game on the internet. 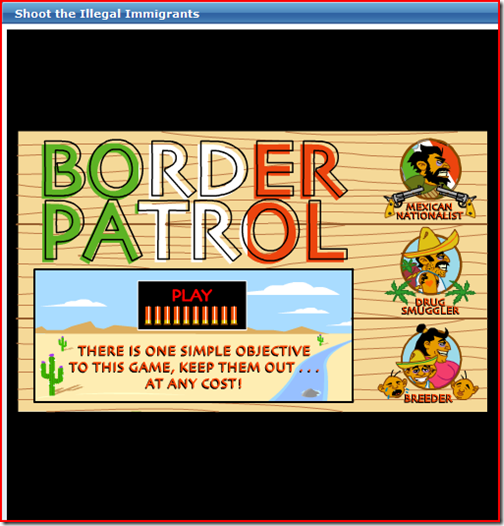 After you are done pretending to murder undocumented workers it ends with the following message: 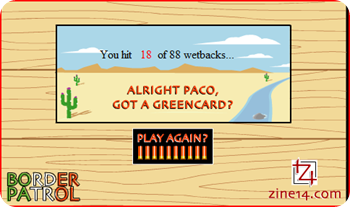 I really hesitated to write this post because I certainly do not want to give more attention to something this hideous, but at the same time, the amount of violence and racial rhetoric that is being aimed at the Latino community must come to an end.

This game is a manifestation of much of the hate speech that has become a part of the social discourse:  Pregnant women are running with a multitude of children and Latino men are carrying guns. This reifies the idea that Latina women are irresponsible breeders waiting to have an anchor baby, and that Latino men are extremely violent (note: each man is carrying a gun).

Of course, all of this is meant to be in good fun right?  And it comes with the additional bonus of attacking a group that is already marginalized while supporting U.S. nationalism.  We need look no further than the U.S. government for the heightened anti-Latino sentiment that is currently on the rise.  From a law in Arizona demanding that individuals carry identification that declares citizenship, to the cancelling of Ethnic Studies, it is clear that an all out war has been declared against undocumented workers.

What is absolutely terrifying, is that many of the racist strategies that have been employed, have a very similar look to the laws that were used to enforce Slavery and Jim Crow.  The hate has moved beyond the normal xenophobic isolationist approach the U.S. has commonly taken, to an all out frontal assault.

While the right bellows regarding undocumented workers supposedly stealing jobs, the contributions that they make to the U.S. are soundly ignored.  Undocumented workers participate in the economy and in fact, the garment industry and the agricultural industry are particularly dependent on their labour.  They bring with them a beautiful language and a rich culture, that can only enrich American society-- and yet, this is easily ignored because it allows obfuscation by rich White men regarding their fear of loss of privilege.

All of this hatred is about 2050.  White men are well aware that the U.S. will soon by a minority majority country, and the privilege which they have viewed as their birth right is in real danger.  This is why there have been so many attacks against Latina women and any children that they have.  This is why there is so much rhetoric about undocumented workers being a drain on society, when in fact it is the rich White bourgeoisie who routinely avoid paying their fair share of the tax burden.  A man like Rush Limbaugh costs the U.S., far more than an undocumented Latino worker trying to raise a family and make a new life.

As the vitriol and the outright racist policies escalate, there is real danger of violence beyond this silly little flash game. Each and every time a marginalized group has had to stand up for their rights, the result has been some sort of violent action on by Whiteness. Remember the 4 little girls that were murdered in the church bombing during the African American civil rights movement? Though the action is always painted as coming from some sort of lunatic fringe, the truth is that the White majority supports the “othering” and marginalization of bodies of colour, and is directly responsible for acts of violence.  Whiteness as good is a child’s fairytale because certainly people of colour have been on the receiving end of enough hatred to see it as the mendacious social meme that it is.

Each day I wait to see what comes next, certain in the knowledge that the hatred will only continue to escalate. Whiteness has far too much invested in maintaining the current imbalance to simply give way, because it is morally the correct thing to do.  So, while we turn our head and declare the game above disgusting, what we should do is consider that this game came out of a social discourse of “othering” not only by Whiteness, but by the U.S. government.  How long will it be before the violence results in blood flowing copiously in the streets rather than in a hateful flash game?

H/T Feministe for the link