I recently decided to get a subscription to “Essence” magazine.  I live in a small town that is predominately White. The world which I negotiate is predominately White, and the magazines that are for sale reflect that.  I subscribed to Essence because I wanted to see images of beautiful Black women and men; however, I quickly learned that I should have listened to all of the critique written by Black women before spending my money. 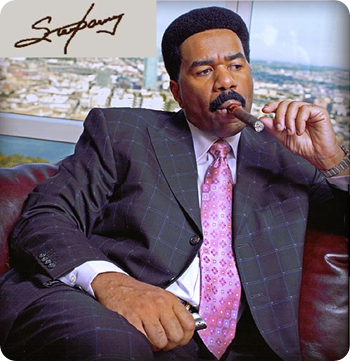 It seems Mr. Harvey has a monthly column in which he gives relationship advice.  The idea that he has some special knowledge is based on his book “Look like a Lady and Think like a Man.”  Black men are cashing in on the erroneous social theory that Black women are desperately lonely and in many ways, Harvey has become the face of this phenomenon.

This would probably be somewhat palatable, if Harvey was not himself a man twice divorced.  Clearly, his success rate when it comes to long term relationships is questionable at best, but he is still considered a “relationship guru,” because he possess that rare commodity (read: penis) that Black women are supposedly seeking.

The White run media has made constant referral to the Black Bridgette Jones phenomenon, and this is based specifically in an understanding that the Black woman is the un-woman of the world.   We are constructed as decidedly unfeminine, over sexualized beasts, while White femininity is uplifted. These stereotypes function to uplift both patriarchy and White supremacy, and this is specifically why they have become so pervasive.  Due to the history between Black womanhood and the White supremacist state, it is quite easy to see why they continue to trumpet these mendacious myths, and the support of Black men like Harvey adds credence to these claims.

Too many Black men function with the false belief that because they are subjected to racism, that they do not live with other privileges.  Gender is just one site of privilege that Black men regularly ignore, because to them, freedom and equality mean having the ability to act like the White male patriarchy.  Black men are quick to remind us that Black masculinity is under attack, while studiously ignoring the ways in which Black women are daily subjected to racism and sexism.  When Black men participate in harmful social memes like the desperately lonely Black woman, they are informing a discourse that others all Black people.

Black men love the supposed Black Bridgette Jones phenomenon because it keeps them at the center of the conversation.  Black men are told that they are valuable and are given the opportunity to police Black women’s behaviours.  Essentially, the myth informs Black women that if we expect Black men to tolerate our supposedly deviant version of femininity, that we are to be submissive and this is an old move taken specifically from the playbook of White patriarchy.  This keeps us constantly thinking about Black men and ensuring their needs are met, while our happiness is pushed to the sidelines.

The White supremacist patriarchy loves this conversation because it serves to divide us from each other.  Instead of focusing on the differing struggles that Black men and women face for true emancipation, we end up fighting one another, thus achieving negative progress. This is specifically why we cannot ignore the Black Bridgette Jones syndrome or label it some form of harmless Black machismos.  What hurts Black women also hurts Black men. Continuing to support this negative construction in a Black magazine like “Essence” is doing the master’s work.  Sexism like every other ism needs to have the compliance of oppressed bodies to proliferate, and if we are to every truly to move to a place of equality, we need to stop affirming negative social stereotypes.