May 1st was the unhusbands birthday.  As always, I did my best to ensure that it was a special day for my guy.   This year the boys and I got him a brand new computer desk, which I had custom made, a t-shirt (‘cause heaven forbid the man should actually buy himself new clothes) and a bottle of cologne.  Upon opening the bottle of cologne his first comment was, “this is a gift for you, not for me.”   In this he would be correct, because unless I purchase cologne he insists on stinking himself up with: 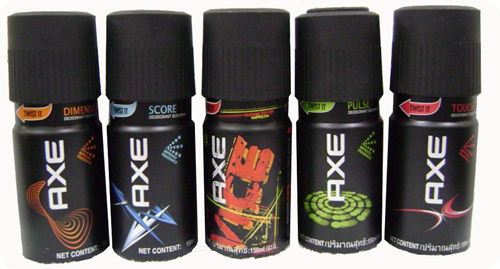 That’s right AXE BODY Spray.  And when I complain that he smells like a cheap gigolo on the make, he tells me that the women at work love to sniff him.  Either these women have zero sense of smell or they are taking pity on the Unhusband. Also, why are they sniffing my man to begin with?

Back in the good old days when we were dating, he used to actively wear nice smelling cologne -- but after almost 20 years together, it would seem that smelling like the equivalent of wet dog is good enough.

To add insult to injury, the man even had the nerve to suggest that I should have saved the money and bought him Old Spice.  I know that this is going to sound ageist, but no man living outside of a nursing home wears Old Spice.  There I said it.  The unhusband is too young for Old Spice.

So while giving him a bottle of Cool Water might have been a little self interested, can anyone really blame me?  Well that is unless your name is Allison McCarthy, apparently Gus has no problem with Axe…et tu brute.

So please weigh in because I am certain that I am the winner this time.   And if there is a perfume or cologne that you could magically disappear from the shelves, which one would it be and why.