To Malcolm X on his 84th Birthday

“Before our eyes our father was taken. Before the eyes of his beloved, he was robbed of his life, and we were robbed of not just the man you think you know, but real simple, Daddy. And she of her man. All too soon”. Attallah Shabazz 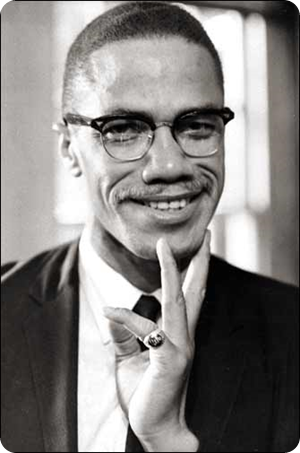 Born Malcolm Little, May 19, 1925 in his life he would come to be known as El-Hajj Malik El-Shabazz or more commonly, Malcolm X. In his eulogy, Ossie Davis referred to Malcolm X as our shining Black prince and the truth of this statement has only become more apparent to those who live in the shadow of his legacy. In his time, Malcolm X was many things and those that would have us turn our back on his greatness, do so from a sense of desire to reject a history that convicts Whiteness of some of the world’s greatest atrocities. Extremist and racist are often labels associated with him because in his time he advocated something revolutionary – the humanity of African American people.

Malcolm grew in a home in which the teachings of Marcus Garvey helped to shape his formative years. His parents attempted to supplement the paltry public education by specifically centering Black concerns and Black pride. The Garvey’s self-help philosophy was the principle of the Little household. Like millions of Black mothers before her, Louise Little embarked upon a path that involved teaching her children to garden and then convert their labour into profit in the local market as well to make education a path for enlightenment and progress.

In the Spike Lee’s biopic of Malcolm X, one of the most poignant scenes occurs when a fellow inmate, John Elton Bembry (Bimbi) opens a dictionary and instructs Malcolm to learn each word; however, this was a practice long since instilled by his mother Louise who instructed him to look up any word that he mispronounced or used incorrectly. Her sole desire was to give her children a broad scope of language, so that they would be able to communicate with people of all levels. Speaking on his education Malcolm X commented, “I finished the eighth grade in Mason, Michigan ... My high school was the black ghetto of Roxbury [MA]. My college was the streets of Harlem. And my masters was taken in prison"

What is most important to recognize is Malcolm is that he was the product of a White supremacist state determined to ensure that African-Americans remained in a post colonial form of servitude that rendered them apathetic, uneducated, fragmented and disorganized. In a long African-American tradition of speaking truth to power Malcolm dared to oppose those that would oppress him and this continues to be his largest crime.

"Raw naked truth exchanged between the black man and the white man is" needed to "clear the air of the racial mirages, clichés, and lies" that have marked this country's history, he explained. Such confrontations represent not a "breakdown" of communication, which has never truly existed, but rather the basis for a genuine exchange rooted in truth.

Marcus Garvey once famously said, “Men who are in earnest are not afraid of consequences” and this is the message that Malcolm internalized each time he dared to speak his truth. There exists this belief that when the marginalized speak that it must be palatable to the listener and this imposes a form intellectual dishonesty and a re-victimization of oppressed bodies.

Malcolm referred to White men as, “blonde haired blued eyed devils,” and some would find these words inflammatory and racist – yet it was White men that murdered his father when he was just six years old. It was White men that called him nigger, as they attempted to squelch his desire to become a lawyer and finally, it was White men who imprisoned him for utilizing the only skills they allowed him to learn, running numbers, women and theft. There are few words of remorse for the near animal that they made him, only recrimination at his vilification of his persecutors.

In a speech at the London School of Economics in 1965, Malcolm had this to say:

“Somebody's got nerve enough, some Whites have the audacity, to refer to me as a hate teacher. If I'm teaching someone to hate, I'm teaching them to hate the Ku Klux Klan. But here and in America, they have taught us to hate ourselves. To hate our skin, to hate our hair, to hate our features, hate our blood, hate what we are. Why, Uncle Sam is a master hate-teacher, so much as that he makes someone think he's teaching law when he's teaching hate”.

We cannot afford to walk away from Malcolm X because so many of the lessons he taught us are relevant today. African-Americans have yet to reach a point of critical consciousness wherein they cumulatively recognize their self worth and this is evidenced by the ways in which Black children continue to see Whiteness as positive attribute while identifying anything authentically Black as bad. Malcolm X is our inspiration to keep fighting. His words not only inspire hope, they remind us all that we are truly beautiful.