What I am Not Teaching My Children

Recently I have gotten a lot of comments suggesting that I am teaching my boys to hate White people.  At first they made me angry, until I realized that these people cannot possibly understand what it is to be a little Black boy growing in a small town.  The first time he was attacked for the colour of his skin he was five years old.  The kids at school thought that it would be fun to call him Brown boy.  After several conversations with the teacher regarding this, the unhusband and I went to the principal to deal with this issue. Though she vowed to put a stop to it, she clearly did not understand how it could effect him throughout his life.  In our conversation regarding this issue, she compared being teased for being brown, to being teased for wearing glasses or braces.

A few weeks ago a young boy on the bus called a bunch of Black kids niggers. My son reported it to the school, and for his trouble he was intimidated by a principal that he didn’t know and ostracized on the school bus.   He was clearly the victim of a hate crime, and yet the only safety he could find was in the embrace of this family.

Last night he went to what we thought was a friends house for dinner and to invite them to his birthday party on Saturday.  When a disagreement arose between the two, the little boy responded by calling him a nigger.  My boy told his friends mother what he said and then walked home.  He struggled with his tears until he entered our house and knew he was safe. His father and I held him and told him repeatedly that he is not a nigger and that it was his friends ignorance that is the problem, not him.

He looked at his dad and said, “I’m surprised that you love me because I am a brown son”.  He told his father that he is the only nice White person that he knows.  You see, I don’t have to teach my son to hate White people, the racism that he has encountered in his brief nine years is enough for him to form an opinion all on his own.

My struggle is to teach him to understand that hating White people is NOT the answer to the racism he encounters, while teaching him to love and respect his Blackness.  It has been my experience that many White parents labour under the false belief that Blacks radicalize their children to protect them when in fact, Whiteness attacks our children and we end up playing defence and drying tears.  At the tender age of 8, the White child attacked my son sure in the knowledge that his Whiteness made him superior.  He may not have understood the historical connotations of the word nigger, but he knew enough to invoke his Whiteness in the conversation as the ultimate trump card.

We are heavily invested in teaching him his history and investing him with pride in being Black, because the world is already teaching him that he is less than.  To that end, the unhusband (amazing wonderful man that he is) came home with a gift for our boy this morning. 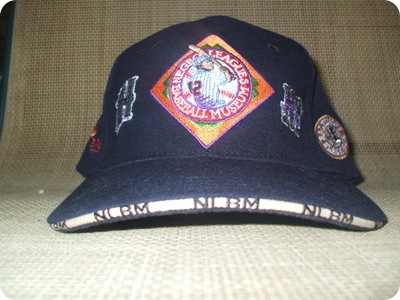 The hat is for the National Negro League that existed during segregation.  It has the insignia of each team that was a part of the league.  The unhusband  wanted our boy  to see that in the face of White hatred, that Blacks stood together and created a community for themselves.

It reminded our son of the the Tuskegee Airmen who I had taught him about last winter.   We are actively teaching him about brave Black men and women who have stood up to be counted in the face of White hatred, so that he can understand that he is not alone, and that he will come through this a stronger person.  The question is not what I  or other Black parents are teaching our children, but what is Whiteness teaching their children.

Already my son knows that his anger is justified and yet there are those that would believe that he has a chip on his shoulder because his lived experiences  will not be listened to or validated.  Instead of owning the blame for their continued actions of hatred against Black people, we are expected to turn the other cheek -- and even a child as forgiving and loving as my boy has his limits.

I don’t want to hear about blaming Whitey for our problems because the truth of the matter is that Whiteness as an institution is a problem for Black people.  Racism is not a thing of the past and Blacks of all ages deal with it every single day.  I don’t want to hear that Jim Crow and Slavery was so long ago, and  that we should just move on -- because Whiteness continues to benefit and sneer at the problems Blacks endure.

So in short, I don’t hate white people, but I do hate Whiteness.  I hate it for how it has not only hurt me, but the people that I love.  I simply cannot stand the pseudo White liberals who cannot and will not understand that despite their so-called race neutral position, that they are a part of the problem.  Don’t send your uncle tom’s to my door to declare racism dead and don’t think you know what it is to be Black because you watched “Roots.” And finally, Dr. King had things to say after 1963, and the only reason you ignore that is because the man that you praise as peaceful and accepting, knew damn well how evil Whiteness is.