Black Teacher Fired for out of Wedlock Pregnancy

The year is 2010 and women are still being punished for being sexual beings.  When Jessica Valenti wrote "The Purity Myth," one of my largest criticisms is that it did not address the ways Black women are often slut shamed and held to this very same standard.  In religious communities, many Black women must be purer than Caesar's wife to have any sort of standing. 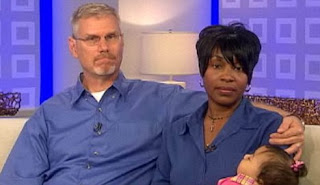 In 2008 Jarretta Hamilton, then a widow with five children was hired by Southland Christian School  in St. Cloud, Fla. as a teacher.  In 2009 she had a meeting with the principle Jon Ennis, and her new husband Samuel Treftz, to discuss taking a six week maternity leave.  One would think that this would be a fairly benign conversation; however, Ennis used this as an opportunity to try and discern when Hamilton became pregnant.


"He actually tried to do the math to figure out when I had conceived. I was absolutely shocked, it came out of nowhere. He actually fell back in his chair when I told him that I had conceived before marriage,” she says.

A week later she was sent a letter informing her that she was being fired from her job for engaging in "immoral behaviour."   This was later confirmed in a letter sent to Hamilton's lawyer, Edward Gay by Ennis.


"Jarretta was asked not to return because of a moral issue that was disregarded, namely fornication, sex outside of marriage. The employment application, which she filled out, clearly states, that as a leader before our students we require all teachers to maintain and communicate the values and purpose of our school.”

Hamilton is now rightfully suing the school for discrimination.  She is seeking back pay for wages lost, and emotional distress.  She has yet to find a new job, and so I imagine that this has caused a financial strain on her family. According her lawyer, schools are doing a public service and therefore cannot impose this kind of sanction on a teacher despite having a religious affiliation.


I think that because the media perpetuates the idea that the sole constructions of Black women are Jezebels, Sapphires and Mammy's, we forget that the standard of purity is also something that we have to deal with.  Black women are encouraged to be sexual beings, but the level of slut shaming we get for it is disgusting. Men want to use and abuse our bodies and then blame us for their actions. It is a typical double standard that has existed for a very long time.  Black women are told to stay pure and clean to uplift the race, while Black men are free to fuck anything on two legs without the same kind of social censure.

We don't find solidarity with White women on this issue either.  As much as they may realize that purity can be damaging, their focus tends to be on things like purity balls, which are overwhelmingly used as a weapon against White women.   They do very little to fight the fact that they are placed on a pedestal, and constructed as the prime example of femininity. As much as they are aware that forced virginity hampers their ability to lead autonomous lives free of performing for patriarchy, it allows them to situate themselves as the rightful mate of the White male, while perpetuating the idea that the most prized woman is the White virgin.  See how this team comes together: White men oppress White women but they unite to ensure that everyone knows that their mating grants them the right to oppress all.

To often virginity is used against Black women as a weapon.  Our bodies are considered foul by default, and therefore; the only good Black woman is one that dedicates herself to the practice of a patriarchal standard of religion, who is prepared to sacrifice all for those around her.  Black women are not meant to be happy, or even content; our role is servitude, and this is specifically why a positive image of Black female sexuality is absent from our social discourse.  White women are more than capable of seeing the ways in which religion can be used to harm women.  Think about the many hours of work Mary Daly dedicated to this very subject. Where they fall short is the understanding that woman does not mean them solely, but woman as in every single person who identifies as female walking the earth.
Hamilton is rightfully suing for discrimination and though this has made national news, I don't see White women lining up to support her.  Unlike Anita Hill, her case cannot be used to further their agenda and this is specifically why we have seen very little mention of the sexism aimed at her.   Black women only become a part of the conversation when we can be used and not because oppression aimed at us is wrong.  I fully support Hamilton and hope that she gets the judgment that she is due.
Posted by Renee at Tuesday, June 22, 2010