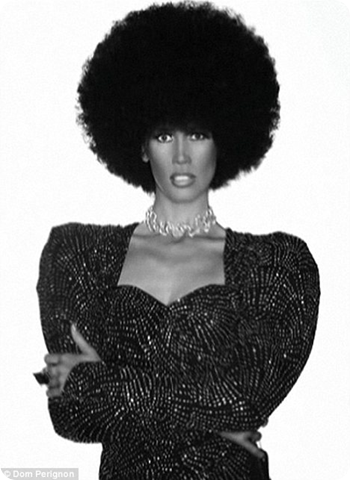 Yes, that is the blonde haired Claudia Schiffer getting her Black on for an ad campaign.  The photos were taken two years ago by Karl Lagerfeld.  Of course they didn’t mean to offensive, they were attempting to be “edgy”.

A reader sent me a link to a story about this last week, and I had to really think about whether or not to write about this story.  Obviously what Schiffer did was offensive, but then POC have been saying that about blackface for a very long time.

When “Hey Hey It’s Saturday Night” did it, they defended their actions by saying that Australia is culturally different.  When Chuck Knipp decided to dress in drag and perform the Shirley Q Liquor show, he claimed to be celebrating Black women.  It was such a celebration that he named Shirley’s nineteen  children after venereal diseases and discount stores.  Not to worry, Knipp is a gay White male and as such could not possibly have any kind of bias or privilege.   There is also the infamous example of Blackface spearheaded by negro sell out Tyra Banks on “America’s Next Top Model”.  And every Halloween, some jerk decides that Blackface constitutes a costume.

Each incident is followed with a faux apology and the statement that the guilty party either did not know that Blackface is offensive, or that they didn’t mean to be offensive. Sometimes it is claimed that this art, and therefore; falls outside of the normal bounds of human decency.  While I agree that good art challenges boundaries, when it reaches the point of reducing the humanity of another, it is no longer art; it is a defacto statement of White supremacy.

I could argue against this by discussing the fact that Black women have an extremely difficult time getting jobs in the fashion industry, Italian Vogue notwithstanding-- but I won’t, because it should simply be enough to hear that a group of people find a particular behaviour offensive to cause a cessation.  Black face continues because despite the post racial bullshit lie we are told, White supremacy is far from a thing of the past.

No matter what the situation is, Whiteness will always defend its right to oppress as evidenced by the comments on this story:

Oh diddims... so people like Beyonce and Rihanna can get lightened, wear fake hair and air brushed to the max no one flutters an eyelid but when it's the other way round there is an up roar.
PC gone mad.. get lives people!

its not racist then when a black women straightens her hair and dyes it blonde,is it racist when whites go on the beach to get a tan,for Gods sake get a life

This is so stupid. If a melanin rich model or normal person on the street wears a fairness cream ( common in India) or tries to lighten her complexion , no one gives a hoot...but THIS causes a furore...

There is a continual refusal to put actions like Blackface into historical context because to do so, Whiteness would have to own its crimes against people of color. Skin lightening creams are extremely toxic and yet people use them because they have internalized a White standard of beauty.  It is an act of self hatred, whereas; Blackface is designed to specifically humiliate people of colour.  The two actions do not have the same goal, and yet they are placed side by side to justify racism.

So here I am writing yet another piece about Blackface, and I am sure someone will tell me to just relax or get a life.  Perhaps they might even suggest that I have no sense of humour, or that I really just don’t get the nature of so-called art; however, protestations and excuses aside, Blackface has always been offensive and will continue to remain that way.  When you ignore the anger of a group of people to their obvious marginalization, it is because you have already decided that your privilege is worth more than their sense of self and humanity.