RavenScholar from ravenscholar.blogspot.com is a fairly new blogger on the Internet. She (re-)discovered feminism and comics at about the same time she started blogging, and has great fun writing about both. She has lots to say, lots of artwork to show, and likes hearing other's opinions.(warning: this post contains a graphic image below the fold)

A Field Guide for Female Interrogators by Coco Fusco (interview here) is a disturbing book. I heard about the torture at Abu Graib, but I had not heard about this.

The military decided to use female soldiers to inflict sexualized torture on their Islamic POW's, because they felt that Muslim men were more likely too break under those sorts of conditions.

Let us examine what is wrong with this situation:
I shall assume that most, if not everyone, reading this agrees with the statement: 'torture under any circumstances is wrong'.

Who else is tired of the military and the government in general profiling (ie stereotyping) Islamic/Middle Eastern people? First off, it assumes the fact that every Middle Eastern POW holds the idea that women's bodies are unclean in some way, as well as other sexist notions. The military beleived this so much that they decided to use a special form of torture to get information. This of course discounts the fact that there are people who are able to lie under torture. Mostly, this is another example of how good the military is at epic fails.

Time for a quote:


"Much speculation has taken place over the last three years about whether the intelligence community developed these sexual tactics because of sexual stereotypes about Muslims and Arabs that have achieved the status of truisms in military circles. Veterans of military intelligence who received training in the early stages of the war have noted they received lectures on the so-called "Arab mind", in which it was argued that when it comes to sexuality, Muslim men are more vulnerable than Westerners. Outdated anthropological arguments become the basis for the development of tactics..."

The author of the book, Coco Fusco, is fond of saying that "when male interrogators perform such, acts on non-consenting subjects it is understood as sexual assault -- but when women do it, it can be authorized as invasion of space". Talk about a double-standard in reverse. The whole argument reminds me of the old idea that women are somehow paragons of virtue (so logically, they couldn't be let outside the home or given room to think for fear of spoiling them). When someone sexual insults another: "forcing them to engage in humiliating acts", forcing them to look at their exposed bodies, and perform sexual acts on them without their consent; it is generally understood as sexual abuse and assault (except the first, which is merely sexual harassment). However none of this applies when it is a woman preforming the aforementioned acts on a man that did not consent.


"...women interrogators use sexual insults, force them to engage in humiliating acts, and also preform sexually for them. Their most infamous antics include gyrating half-clothed atop seated prisoners and smearing them with fake menstrual blood in an attempt to break them by invoking cultural taboo."

Having talked of the problems of and with the Muslim prisoners, it is time to switch the focus to the US Military female interrogators. First off, it matters not to me that the interrogators agreed to use the sexual tactics. The point is that it is wrong and sexist. The very idea that women's bodies are again to be used as objects towards an end (never mind that it's not social scoring this time), exemplifies one manner in which sexism is aimed at women. Part of the tactic is sexual performance, which in this case, sounds quite a bit like sexual exploitation of the women interrogators by the largely-male military command structure.  There is also the matter of "email responses to news stories about sexual abuse of detainees in which readers said they wished they could be "harassed" that way by female soldiers". Why yes, people regarded this more as some sort of pornography instead of  a crime against humanity. As Coco Fusco pointed out: "Detainees don't get to ask for what they get, and don't know when it will stop. They don't get to say 'No means no'.

Then there's the fact that the military went and perpetrated stereotypes of women in the act of the torture. There is one interrogator that was very helpful: he said that the tactics included "using women as bait" and assuming the roles of "the bimbo who can't do her job" and "the sympathetic mother who wipes your tears". One of the interrogators at the interrogation camp that the author attended said that female interrogators could "elicit confessions best by pretending not to be interrogators at all, posing instead as nurses or even girlfriends". The military already has a history of sexist behavior towards women. This helps them none.

Part of the scandal with Abu Graib and also Gauntanamo is that the government did a cover-up of the torture. The part that could be constructed as marginally worse, is the fact that the media did something similar. There was the coverage, and the debates about whether or not torture is acceptable. No one, as far as I remember, mentioned anything about sexualized torture or women being involved in any way. Because the media is a terribly important source of information for many, many people, this too, could be constituted as a cover-up.
I am sorely disappointed that this was my hundredth post.

A picture of a dead man for your viewing pleasure. 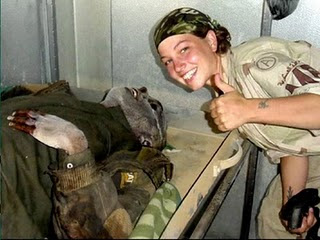