I have a  new piece up at Global Comment 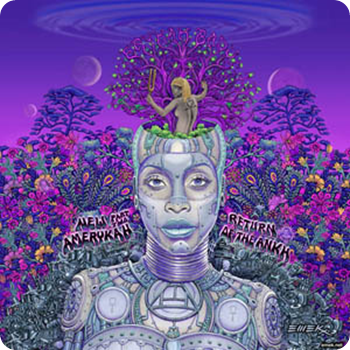 Erykah Badu lives her life without apologies. In a White supremacist patriarchal society, such an approach to life immediately comes under scrutiny, because it threatens the hierarchical order that we have created.


When I first became aware of Badu, it was not because of her music, but rather the public furor that erupted when she announced that she was pregnant for the third time. Badu now has three children, and each has a different father. She was forced to respond to the slut shaming that followed the announcement of her pregnancy with the following public statement:


I PRAY WITH MY CHILDREN
I FEED THEM GOOD FOOD
THEY RESPECT PEOPLES DIFFERENCES
THEY TRAVEL THE WORLD WITH ME
THE KNOW WHO THEY ARE
THEY ADORE THEIR FATHERS AND ARE LOVED BY 2 PARENTS OR MORE -
OR TWO OR MORE SETS OF LOVING GRANDPARENTS
THEY CRY
THEY GET HURT
THEY GET SICK
THEY HEAL
THEY ARE real
THEY ARE NOT AN IDEA or a TOPIC
AND NEITHER AM I .
I AM ALIVE .
I AM BEAUTIFUL WOMAN.
I AM A GOOD WOMAM.
I AM GROWING
I AM COMPLETE WITH OR WITHOUT A PARTNER AND WILL ALWAYS BE
AND I HAVE DREAMS OF A FAMILY STRUCTURE
ALL OF MY DREAMS DO NOT COME TRUE
AND DESPITE ALL OF THE PAIN IN MY LIFE …
IN MY MOTHER’S LIFE …
IN MY GRANDMOTHER’S LIFE
WE HAVE ALWAYS ENDURED
AND THERE IS SO MUCH JOY TO BE EXPERIENCED.
I NEVER HAD A FATHER AND I DON’T KNOW WHAT THAT FEELS LIKE -
BUT MY CHILDREN DO , AND THEY LOVE THEIR ‘PARENTS.’

The attacks she faced were not about sexual morality and the welfare of her children; they were about disciplining the Black female and labeling Black women as irresponsible breeders. P.Diddy has three kids and although they each have different mothers, he has never been subjected to the kind of shaming which is regularly aimed at Badu — so much for the “welfare of the child” argument.


Apparently, only serial baby mommas exist, but fathers are just doing what comes naturally — spreading their seed. Clearly, the world is being destroyed by the baby mamas: a term that was specifically created to denigrate Black women.

Some might say that Badu courts controversy. In March she released the video “Window Seat,” in which she was filmed walking naked through downtown Dallas. It was inspired by a Matt and Kim video, in which the pair ran naked through downtown New York. The media was quick to once again question the harm done to the children that were present. Badu was also further slut-shamed for having the courage to stand nude before the world on her own terms. One commenter at the L.A Times had this to say:
Finish reading here
Posted by Renee at Friday, June 11, 2010