If you are a marginalized person police brutality comes as no surprise, in fact, in many cases it is expected.  When cops aren't shooting us without provocation, they are pepper spraying, or in this case physically abusing us. 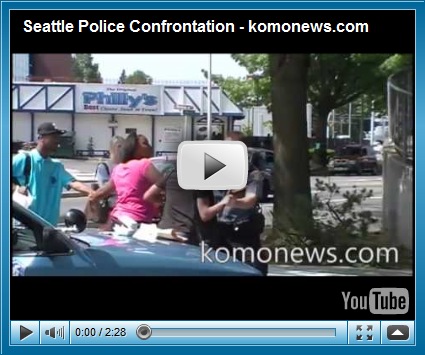 Video Description: A cop is struggling with a young Black woman who repeatedly says "get the fuck off of me".  She twists and turns attempting to escape.  Her friend intervenes and pushes the police officer who then responds by punching the friend with a closed fist directly in the face.  The cop then returns and stuggles with the first woman repeatedly saying stop struggling.  When asked why he punched the young woman he responses because she was grabbing me.  The young woman begins to weep as she places in handcuffs.

The Seattle pigs police are currently investigating what they call an assault on a police officer, even though he was not the one to receive a punch in the face.   The crime that brought these young women to the pig's officer's attention was jaywalking.  Somehow, I cannot help but believe that it was a combination of their race, gender and age that made officer less than friendly decide to approach them.

I am not shocked that they acted incredulously when he first tried to question them.  All they did was cross the street, and jaywalking is one of those minor crimes that we engage in constantly.  For this situation to escalate to two Black women in handcuffs after being manhandled and  punched by a pig police officer is absolutely wrong.

I know that many believe the law is blind but can you really see an officer attacking a young White male in a suit and briefcase?  I think that the pig cop would have simply ignored the man and gone about his business.  There is no need to arrest White males of class privilege, if the purpose is to uphold their strangle hold on power. Any Black person that tells you that they are not afraid to be questioned or interact with a pig cop is either a liar, or out of their mind.

I know we have that whole social myth about serve and protect, but quite often this means an all out assault on bodies of colour.  These drones police poor neighborhoods of colour to fill the quota of captive slaves for the prison industrial complex -- but hey, think of the jobs it has provided for towns, plus the boost in population  when it comes  to deciding the percentage of communal resources and government power.

And it is hardly their fault that people of colour all have criminal intent right?  They are not part of the systemic oppression in any way shape or form right?  They're all God damn heroes who don't know the difference between their tasers and sidearms.

Cue the excuse of she should not have resisted arrest.  Her friend should not have tried to intervene.  Yes, this all somehow magically justifies that a cop decided to screw reasonable force and punch a woman square in the face.  We can always find a reason to ignore their violations because deep down admitting that pigs cops are nothing but an armed gang sanctioned by the government patrolling cities is scary isn't it?

How many broken and battered bodies of colour is it going to take? You can forget another round of sensitivity training because the masturbatory pleasure they get from the power we have invested in them ensures their desire to act with impunity.  When I see a pig cop, I don't see a hero, or someone that is duty bound to protect me, I see a person looking for the first excuse to bash my head in, and you can bet those young women did as well.