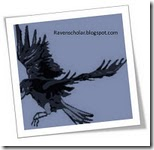 RavenScholar from ravenscholar.blogspot.com is a fairly new blogger on the Internet. She (re-)discovered feminism and comics at about the same time she started blogging, and has great fun writing about both. She has lots to say, lots of artwork to show, and likes hearing other's opinions.

It’s that time of year again. The National American Miss people are sending out flyers. Last year's I really didn't like, and this year's I found more issues with, after a year of paying attention to feminist blogs. Lets examine this:
First, the cover 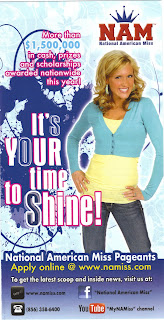 Typical Euro-centric ideal of beauty? Check. Airbrushing? Check. "Fashionable"? Check. Vaguely pained look? Check. "Sexy" Posing? Check. Looks old enough to be the mother of the audience targeted? Why is she even on this thing?
The inside 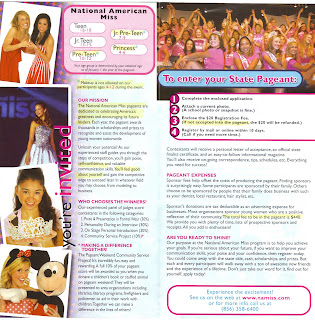 EVEN MORE European girls? Check. Posing? Check. Now onto the highlighted stuff. That's were it gets really insidious. 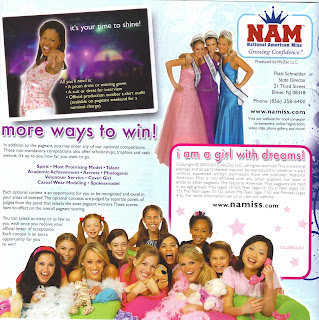 Finally, some token racial diversity! Posing? Check. Airbrushing? Check. Ridiculously happy smiles? Check. People who are clearly models with their perfectly white teeth and shaped eyebrows who are surely not the sort of people who would actually be at this? Check.
One last highlighted thing:
"All you'll need is:

Say it with me people: Hidden Costs! So lets say you manage to scrape up half a thousand dollars to go to this thing. Now they want you to buy a prom dress! And a suit! And a t-shirt for "a nominal charge"! Turns out you need more like another $430 there!

Total cost: $870. Way to raise the bar. Now they only want you if you've got about a thousand dollars lying around! Now I know why the popular pretty girls on TV are always rich whites! They're the only ones with enough money to be official.

Congratulations, National American Miss pageants. You have now officially sent the most racist and classist bit of mail I have ever seen.