When I write about bad cooking, nine times out of ten it is to shame the unhusband; however, this week Gus AKA Allison McCarthy reached such a level of shame, I just had to share this with everyone.  Allison and I love talking about food because we both love to cook.  I was watching “French Cooking At Home,” a cannuck cooking show on the food channel, when I mentioned to Allison that I saw a great recipe for Artichokes with Brown Butter Hollandaise Sauce.  Just watching that made my mouth water. Is there anything on earth more heavenly than butter? Okay I need a moment to drool.  So, as we were oohing and awing over the butter (note: this recipe calls for 1 1/2 cups of unsalted butter) Gus aka Allison McCarthy asked me how to make the sauce.  When I explained that it required 4 egg yolks, she informed that she cannot separate eggs. Who cannot separate eggs?  I mean really…

I was forced to tell her about this product. 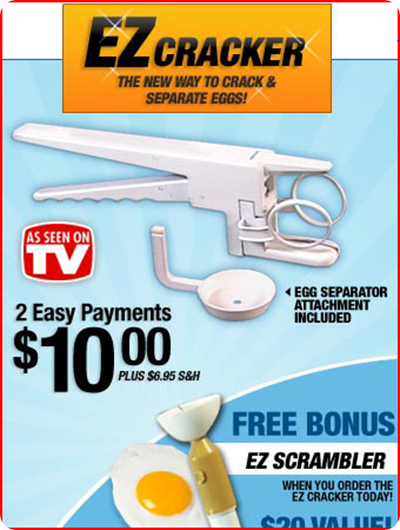 Click the above image to see a demonstration of this product.

When I first saw the EZ cracker advertised on television, my response was are you freaking kidding me.  Who cannot crack and egg, and who cannot separate an egg?  I even sent it to Sparky as a suggestion for a new kitchen toy for his Beloved, because he is constantly going on about his husband’s love for gadgets.  In the commercial they make people cracking eggs look so completely inept that it is ridiculous.  Never did I see this as anything other than a gag gadget until Gus aka Allison McCarthy mentioned that she cannot separate eggs.

Since her birthday is in February, I will have to invent some other reason to send it to her.  We cannot have poor Allison suffering from an inability to separate eggs or having to buy cartoons of egg whites to make up for this deficiency.  I wonder how she bakes, if she cannot separate eggs?

Alright, what seen on tv product do you secretly want or need, and what common everyday skill are you unable to do?  Don’t leave poor Gus AKA Allison McCarthy hanging out here by herself, share your shame.