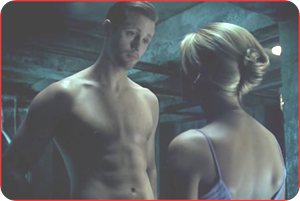 It was a very long wait and the season opener did not disappoint.  The season begins right where we left off, with Sookie looking for Bill in the French restaurant where he proposed to her.  After running around town trying to get the police to look for Bill, Sookie turns to Eric for help.  Gotta say, I was very disappointed that Alan Ball had Sookie say to Pam, “I don’t have time for any of that lesbian weirdness tonight”.  I get that Sookie was upset, but this comment really screamed of lesbophobia and painted Pam as deviant because of her sexuality.  This line is especially problematic when we consider that in the next scene, we watch as Sookie walks into the basement to find Eric fucking a dancer is who tied up and spread eagle.  A great view of Skaarsgard naked almost soothed my sensibilities.


Back at Bill’s,Jessica is busy trying to figure out what to do with the body of the man that she killed in a fit.  At Merlotts, Sherrif Dearborne is investigating the death of Eggs.  This scene once again reveals yet another Alan Ball failure, when Arelene asks if slavery is responsible for Egg’s actions.  Really?  What the hell, why go there?  It belittles the ongoing struggles people of the African Diaspora go through”.  This problematic discourse is compounded when Arlene says in frustration, “I hate it when they make everything about race?” Furthering the idea that White people should make it all about them, Sookie and Tara end up in a fist fight when Sookie tells Tara that she told Eggs about what Marianne made him do.  Lafayette pulls Tara off of Sookie who says angrily, “we’re in the same boat you know, Bill’s missing.”  Bill may be missing, but Eggs is dead.  But hey, he is only a Black guy in a mostly White town right.

Lafayette calls Tara’s mother to take care of her.  When she apologizes to Lafayette for shooting a gun at him he says, "Bitch you and me bitch ain’t never gonna fucking happen".

Hoyt spills his guts to Jason and admits that he has no girlfriend and no place to live.  Proving that he has a stitch of decency, Jason invites Hoyt to come and stay with him. 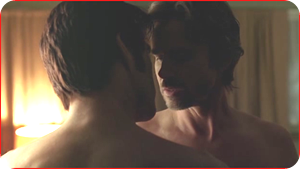 Sam has a very erotic dream about Bill.  I suppose this is meant as an offering after the very nasty comment that Sookie said to Pam.  I do think that it is interesting that when Sookie dreamed about Bill and Eric after drinking their blood they were far more graphic and clearly involved physical contact.  Though Bill did make a comment about the water being hard the fact that they never even kissed seems to send the message that their is some sort of discomfort when it comes to sex between two men.  Having gay representation does not necessarily mean a positive step has been taken and this is especially true when the scene is sanitized relative to how heterosexual sex is portrayed.


Eric gets a little visit from the Queen and the magistrate.  He is very concerned with the rise in V sales.  Apparently, because there are no missing vampires, he concludes that a vampire is in collusion.  To him, “the blood is sacred and using it for anything other than procreations is blasphemy.”  Did that remind anyone of the Vatican and their position on sex outside of marriage?   It seems that Ball cannot make up his mind regarding what he intends to use vampirism as an analogy to.
Hoyt and Jason meet up with two women at Merlotts and when Hoyt begins to talk about Jessica, Jason tells him that as a roommate he has to deal with “the pussy overflow”  It sure didn’t take long for Jason to take Andy's advice to “turn his conscience off and his dick on”.  Back at Jason’s, despite all of his bravado at Merlotte’s, Jason is unable to perform sexually. He keeps picturing bullet holes in their head and after sharing his distraction the girls decide to leave.
After the magistrate leaves we learn that Sophie is in debt to the IRS, and this is why she is authorizing the sale of vampire blood.  When Eric questions her decision, she makes her position clear by grabbing him by the testicles (lucky girl).  When Eric tells her that Bill is missing, she simply walks out without concern.

Pam goes on her nightly rounds for Eric and finally pays Sookie for the service she provided when she helped to find Godric in season two.  She watches as Pam’s whole body shivers, and learns that this is a physical reaction to Eric calling her.  Pam’s next visit is to Lafayette to deliver more blood, and to inform him that she wants it sold by tomorrow. When Lafayette begins to protest, Pam reminds him that she is not hooker and can snap him in two.
Acting on a hunch, Sookie finds Jessica and asks if she felt Bill call her.  The two of them head off to find out if Jessica can track Bill from the call that she received the night before.  They find the car and one dead body in it with a strange tattoo. Jessica looks up the tattoo and finds that it is associated with “operation werewolf”.  Bill straggles into what a rundown home with an older woman living there.  She invites him in and he feeds her leaving her some money for her trouble. When he asks her where he is, he finds out that he in Mississippi (people who have read the books will get the connection right away).
Back at Lafayette's, Tara’s mother is busy trying to hit on the minister.  Tara removes herself saying that she has to take a shower but uses this as an excuse to start taking whatever pills that she can find.  Lafayette bursts in shocked that her mother left her alone. He pounds on the bathroom door as Tara swallows more pills.


We see Bill running through the wilderness when he soundly surrounded by wolves.  In the last scene of the evening Bill says, I should warn you, I’ve fed.  He displays his fangs and the scene goes to Black. 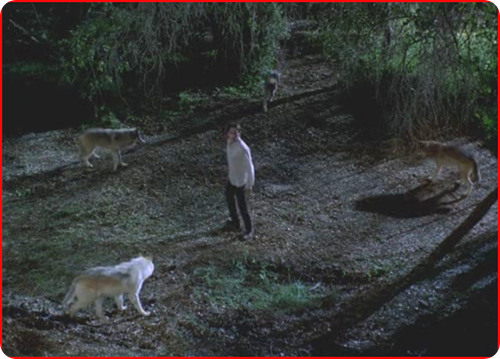 There was a lot to unpack this episode – much more than I can do in a blog post without writing a novel so please join Tammi of What Tammi said and I, as we break it down in a podcast next Sunday at 4pm.  In the meantime let’s have fun tearing it apart in the comment section.
Posted by Renee at Monday, June 14, 2010