“Un bebé no se hace solita, or, You can’t make a baby by yourself” 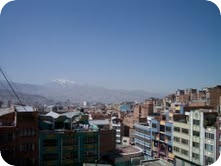 This week, I am concerned with a number of interrelated issues that are shaping women’s lives in Andean Bolivia: the ways in which society—and in particular, men—manipulate women’s experiences of motherhood; how the local and international press report on some crimes, and ignore others, and how those that commit these more “mundane” crimes enjoy almost complete impunity.

In the last several days, the BBC and La Paz’s daily newspaper La Razón each brought us a story of thwarted motherhood. First, on June 4, the BBC reported on a mother who attempted to sell her newborn child for US$140 to a woman unable to have children of her own. Then, yesterday, La Razón covered the story of an adolescent girl who was arrested after stealing an infant from a hospital in the city of Trinidad. Both of these stories make good news—they are flashy, they have clear victims and villains, and their resolution makes the Bolivian police look—for once—effective. But there is something else going on here, something perhaps far less newsworthy, but all the more important because of its prevalence: men’s abandonment and abuse of women.

First, let me say that I am not defending these women’s actions. Selling a person—especially one that you have recently given birth to—and stealing someone else’s child are both reprehensible crimes. That is, in part, why they are so newsworthy. However, it is important to recognize all factors to a crime, and place blame where blame is due. And in these cases, the blame falls partially on these women’s male partners.

First, consider the case of the woman who attempted to sell her baby. Although the price of US$140 that the woman and her “customer” fixed for the child represents much more money in Bolivia than it does in the U.S. or Canada, it still signals the acute desperation that this reluctant mother must have been experiencing. When asked why she was selling her child, the BBC reports that, “she agreed to sell her child because she had been abandoned by her husband and could not afford to support the child.”

Due to her folly, this woman will be charged with child trafficking and will likely face years in prison. And her husband? The man whose actions may have contributed to this act of desperation will likely remain free. Few know that Bolivia’s penal code stipulates a prison sentence of 6 months to 2 years (or a hefty fine) for men who abandon their families. If the wife or girlfriend is pregnant at the time of the abandonment—and if she sells her child as a result—the man faces one to five years in jail. And yet, few men are ever punished for abandoning their partners and children. In Bolivia, the impunity that these men enjoy is so common that the BBC reporter did not even find it relevant to mention that the woman’s abandonment also constituted a crime. And, I mean, why would you mention it? In addition to being common, the abandonment of women and children is also simply not as flashy as baby selling.

And the adolescent girl who stole a newborn from a Trinidad maternity ward? Her reasons for kidnapping the infant are even more heartbreaking, and highlight the sticky web of social problems surrounding women and couples in Bolivia. The 17-year-old girl, labeled M.C.T. by the press, reported that she stole the infant because she had recently suffered a miscarriage, and that “her partner had told her that if she did not have another baby, he would leave her” (translation mine).

Just pause for a moment and consider this—that, there is so much pressure for Bolivian women to be mothers—that there is so much wrapped up in that identity—that even at age 17, M.C.T. had already lost a child and felt desperate to have another. That her partner, instead of seeing her through the difficulty of the miscarriage and patiently awaiting the next pregnancy, demanded another child—as if it were something she could produce alone. And let’s not forget the woman who attempted to buy that infant for US$140—that she, too, must have felt such desperation to be a mother that, rather than pursuing adoption to bring home one of the 17,000 children that are abandoned in Bolivia each year, she decided to buy a kid.

As I said before, these crimes are terrible. But after living in Bolivia, and seeing and experiencing both the pressure to be a mother, and the unreliability of your average man, I am reluctant to place the blame solely on these women. Because after all, those babies didn’t get here alone—despite what these men’s actions would seem to imply.