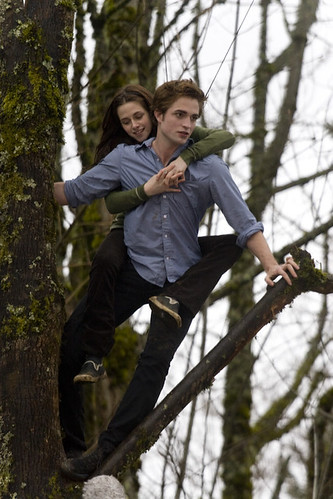 Robert Pattinson should really keep his comments about women to a minimum, considering his little joke about how much he hates vaginas, however; it seems that channeled Edward when he decided to play prince in shining armor when he ran to the defense of Kristen Stewart, after her rape analogy came under criticism in the press. Okay, all you twi fans take a moment to oooh and aaah before I burst your bubble.  The following is a quote from Us.


"What you don't see are the cameras shoved in my face and the bizarre intrusive questions being asked, or the people falling over themselves, screaming and taunting to get a reaction," she tells the new issue of Britain's Elle. "The photos are so... I feel like I'm looking at someone being raped.

Just no! Nothing feels like rape accept being raped.  I am sick and tired of these analogies because they reduce the seriousness of rape. The word rape is casually tossed around as a descriptor and yet when an actual victim stands up to report her violation, she is slut shamed and questioned.  This woman has no idea what it feels like to have your sense of self ripped away from you, to feel the fear, or the violation, but she can casually toss around the word because rape is meaningless socially, due to the fact that we live in a patriarchy.


"I'm so sensitive about stuff like that ... I used the wrong word. I should have said 'violated."

Really?  No shit Sherlock, but you should have added the words I am sorry.  You see, usually when people mess up publicly, the proper response is to admit what you did and apologize.  In case you think I am being to hard on your poor socially inept Bella, what follows should cement my point.

"I probably shouldn't say this," she quips, "but I just feel like people got so excited once they saw that it was me. It was like, 'Sweet! Let's get her!' ... For the people to exploit it under the guise of being morally upstanding is disgusting -- and it embarrassed me because I was a part of it."

And of course she was right, she should have kept her mouth shut -- but I suppose when the verbal diarrhea begins to spew, opening wide and cramming your entire leg down your throat is unavoidable. There can be no doubt that Stewart has been subjected to sexism; however, this current media storm is about her reductionist use of the word rape.  If she is embarrassed, it should be for her failure to apologize publicly for her statement. Of course, poor Stewart is far too delicate to be held accountable, and so Pattinson had to come running to the rescue. Don't these two ever get tired of playing Bella and Edward? Sheesh.


"None of those associations came out and gave a statement [criticizing Kristen] without being called upon by the media first," snipes Pattinson

"That whole system of Internet journalists, where no one is called to account, is almost entirely about hate. All these people get away with doing it because they have no responsibility to anyone."

It didn't occur to the prince of sparkly vamps, that perhaps these organizations didn't know about her comments until they were contacted.  Pattinson my feel that the world of "Twilight" dominates the entire universe, but there are plenty of people that really could not give a shit.  If I were not such a huge fan of vampires, Meyers purple prose filled Mormon love story would not have even been a blip on my radar. There are some people that don't love vampires enough to even consider delving into the hot mess that the movies and books are.

I also am not amused that it is bloggers, that are once again taking the heat, because some celebrity douche does not want to be held accountable for their actions.  The idea that we are somehow less legitimate because we are writing on the internet, outside of the mainstream media is ridiculous. Just because Sarah Palin shoots off her mouth regarding bloggers and the media, does not mean that it is a good idea to follow her example. No one considers the way in which the media is often filled with bias and supports harmful isms.  Bloggers provide a unique spin and represent the unfiltered voice of the people -- but why support that when we can read the same agenda filled canned stories that enforce mental slavery.  Yeah for conformity and keeping quiet.

It has been rumored for sometime that Stewart and Pattinson are dating and if (note, how I used the word if) they certainly deserve each other.  Douchebaggery deserves company.
Posted by Renee at Tuesday, June 29, 2010