Yeah, It’s Not Cool To Use a Woman’s Mouth Like a Urinal

I am still in shock that I had to write the above title.  I mean really, does it need to be said that this: 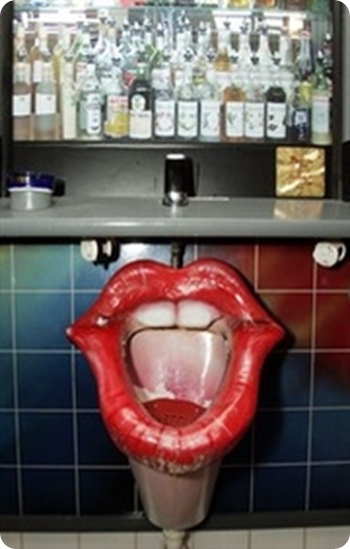 is not acceptable?   I get that plenty of people play water sports in their sexual activity, but the everyday act of encouraging men to pee in women’s mouths is simply degrading and wrong.

According to Yahoo News, it took a year of protest before “The Honest Lawyer,” a restaurant in Hamilton, Ontario, Canada, finally came to its senses and removed the disgustingly sexist urinal.    Protests “sparked a letter writing campaign that attracted almost 1,100 people, including Ontario's NDP leader and Hamilton's mayor”.

This offensive urinal is manufactured by Bathroom Mania! in the Netherlands.  It is called the “Kiss Toilet”.  This is not avante garde and it certainly is not art.  What it does is encourage the average man to belittle women.  You pee on someone that you think is less than you, not someone you think of as an equal.  I still cannot believe I had to say that.  Bathroom Mania describes its creations as transformative:

Kisses!' transforms a daily event into a blushing experience! Works better than aiming at the fly! This is one target men will never miss!

Right, because men know that their penises are just naturally associated with a woman's mouth.  Women are not beings to be respected; we are simply receptacles for the various male body fluids. And since the bottom line is to take men to that special place, who it impacts women can be soundly ignored.

Sanitary ware has been standard white and strictly functional for ages. But standard is not what Bathroom Mania! opts for! In our busy and demanding world the bathing-experience is the moment for reflection, peace, a bit of rest and for simply dreaming off into another world. Take a journey into your own imagination, with sanitary ware that is innovative, playful and exciting.

Yes, a toilet shaped like a woman’s mouth will take you to a world in which men are never questioned for their violations against women.  And none of this is at all harmful, because we supposedly live in a post sexist world, even though women suffer various kinds of violations at the hands of men every single day.

Perhaps instead of focusing on Kiss, they should have gone with a Little Alice Cooper, because Only Women Bleed.

Good art or social commentary challenges norms, it does not cement ideas that are oppressive to specific groups for profit. The world we should all be dreaming of, is one in which everyone has a minimum standard of treatment based on a firm belief that all bodies are equal.

H/T Black in Alberta via e-mail.