Associating Obama With Watermelon is not a Political Statement 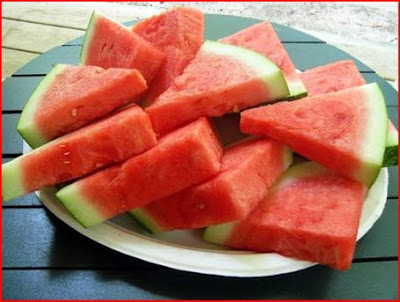 Watermelon has been negatively associated with Blacks for a very longtime and yet somehow when called on their racist language, White people always claim that they mean something else.  When Dean Grose, the Mayor of Los Alamitos sent out an e-mail entitled "No Easter Egg Hunt At The White House This Year", it included a lovely little watermelon patch on the White House lawn, but he "didn't mean to be offensive".   Whiteness just cannot stop using watermelons to racially attack Blacks.

Darwin Holly, a former employee of TAMKO Building Products  was fired in 2009 after a racially charged comment at a company picnic.  This joker sat down with a plate of watermelon and announced to his co-workers, that he was going to have a piece of "Obama fruit."


Holly appealed his termination to the state's Labor and Industrial Relations Commission, which agreed that he violated TAMKO's harassment policy that prohibits employees from "making racially derogatory jokes, comments or displaying or possessing racially derogatory or offensive symbols, emblems, writings or other documents on TAMKO property or while conducting TAMKO business."

So Holly appealed again, this time to the Missouri Court of Appeals (Southern Division). Last week the court handed down its ruling, agreeing with the commission that Holly had indeed been fired for cause.

So, his co-workers thought that what he said was offensive, and the Labor and Industrial Relations Commission agreed with this, but when he went to argue before  the Missouri Court of Appeals (Southern Division), racist jackass Darwin Holly, had this to say, "In my mind I was calling the president a melon head, no reference to racial whatsoever."  If he wanted to call Obama a "melon head", why didn't he just say that, instead of using watermelon to make his point?  Oh I know, he's a racist.  It's pretty obvious to me. I have no problem with a legitimate critique of Obama, in fact this is necessary to ensure that he is doing his job; however, the minute his race is used as an attack, then it is not about his political performance -- but Whiteness' fear that its power is being diluted by the presence of a Black man in the house that slaves built.

The watermelon quips are not funny and Blacks have repeatedly said this.  It is racism that causes White people to continually make this analogy -- and it is privilege that leads them to believe that if they spew some bullshit about not really meaning it, or that it was meant in a different context, that they will not have to face the consequences of their action. Even if the watermelon analogy were to be reclaimed, Whiteness is not in the position to do so.  And I know that this is a particularly hard concept to grasp: Whiteness does not get to determine what is and is not racist, when it is in their interest to devalue Blacks at every turn.  I know that in a little while, I will end up writing a post identical to this one, because some racist jackass will have to prove how witty ze is by using this same analogy -- and so I thought I would get a hard start and simply say, "Dear White people, just stop it, we don't believe you didn't mean to be racist".