Americans routinely come into our country and express surprise that we have different laws and a different culture.  Somehow a flag, border and separate government are not enough for them to realize that there is a difference between Canada and America.  You saw it when Madonna called the police in Toronto fascists, when they raised questions during her Blonde Ambition Tour regarding her performance -- more recently, Anne Coulter was told to keep her hate speech on half on the 49th parallel, and now Pamela Anderson and the hate group PeTA, were denied a permit when they attempted to display their sexist billboard in our home and native land.  I am the first one to say that there are many issues with Canadian society, but sometimes we get it so stunningly right, one simply has to stand and applaud. 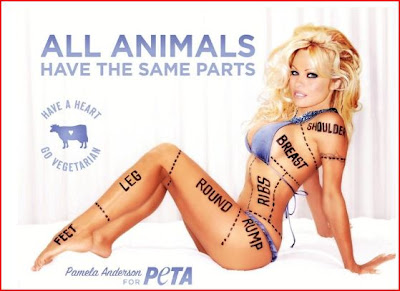 PeTA and Pam sought to display this ad in Montreal and the government denied a permit on the grounds that the ad is sexist.  It is certainly easy to see why they came to this conclusion, because women are being reduced to animals and body parts.   Why would Canadians want more of this in our culture, when we have our own issues with patriarchy that we are currently trying to fight?

Of course Pam had to run her mouth:


How sad that a woman would be banned from using her own body in a political protest over the suffering of cows and chickens… In some parts of the world, women are forced to cover their whole bodies with burqas—is that next? I didn't think that Canada would be so puritanical."

For someone who was born in British Columbia, she certainly is clueless when it comes to Canadian ideals. Just because PeTA chose to stick a Canadian face on their misogyny, does not make it acceptable to the wider society. And of course, PeTA had to back their favorite lettuce bikini wearing spokesperson

PeTA and Pam are determined to miss the point.  Of course we have women that wear bikinis.  In fact, you can go topless in the city where I live -- but of course, they are more than willing to misrepresent Canadian values, because it allows them to deny that once again, they are reducing people to animals.  It is offensive.   Pam's individual agency in terms of choosing when to reveal her body is  is not the issue, the issue is that her actions hurt other women.  This billboard challenges the humanity of all women, and I don't see how anyone can reasonably look at this ad and claim that it is not reductive, unless they have placed an agenda over and above the person-hood of women.

I also feel the need to address the Burqa comment that Anderson made.  Western women need to just stop it. Yes, there are certainly countries in which women are forced to wear the Burqa; however, there are plenty of women who choose to wear it as part of their religious practice. If we are supposed to respect Pam's agency, why is she so resistant to respecting the agency of Muslim women? No one stopped her from posing for the ad, we simply don't want to view it -- and that is a sign of our agency.

I am tired of White Western women pointing to Muslim women as uniquely oppressed, when plenty of sexist oppression happens in the west every day.  I want to know why they never have anything to say when so-called Christian men are using the bible to justify rape, murder and torture? Yes, it absolutely happens, but of course we cannot blame Christianity, it is supposedly of peace, whereas; Islam is socially constructed as violent and oppressive.  If she were to actually read the Koran, she would find that it is actually far less oppressive than the bible.  It calls for both men and women to dress modestly and simply because some men in power have chosen to pervert the word of Allah, does not make it as anti-woman as White westen women are creating it to be. For Pam's statement to be true, you would have to completely ignore all of the work of  Muslim women, who are using their religion as a spring board for their anti-oppression work.

This ad is just another case of PeTA, being PeTA -- but that does not mean we should allow them to present their anti-woman perspective without critique, even though it becomes tiring to repeatedly say the same thing.  PeTA is determined not to value people, and we must apply the same determination to fight the reduction. Their approach does not liberate animals;  it only offends the marginalized groups that PeTA routinely attacks.
Posted by Renee at Wednesday, July 21, 2010