The Gates: The Enemy Within 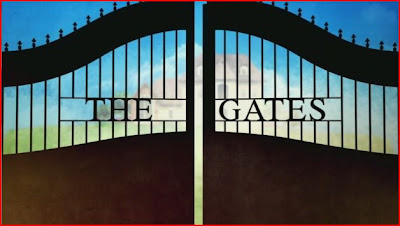 Hello Vampire lovers, Sunday brought a new episode of ABC's "The Gates," and so I figured since we have so many lovers of the un-dead reading this blog, that we could chat about it. If enough interest is raised in following this series, I could make it a regular feature.

The episode centered around a father daughter dance.  Okay, perhaps my womanism is showing here, but those dances just creep me the hell out.  A dress up date with daddy, sort of screamed purity ball to me, even though that  was not specifically said in the series. I think it probably creeped me out in large part because I know that "The Gates" is a closed community.

At the very beginning of the show, we learn that the wolves were out running and encountered a hunter, which they were forced to kill.  When confronted by coach Ross about their activities, the teenage pack of wolves purposefully does not mention the dead hunter.  Unfortunately for them, the hunter's wife files a missing person report and the police begin to investigate the disappearance.  Coach Ross, moves the body and kicks Marcus off of the team for jeopardizing their anonymity.  I have to say that I was impressed with a Black werewolf, but I am even more impressed with the fact that he is the alpha wolf.

So, Nick admits to Laura that he killed the man on purpose.  Of course, it was justified, because he was a rapist and he would have walked free.  She stands there shocked and assures him they will get through it.   This is meant to cement in the mind of the viewer that the police chief is a good man, but all I could see was yet another corrupt cop willing to twist the rules.  I could not help but think of all the men and women who have had their lives ruined by some lying cop, because ze though that ze had the right to play judge, jury and executioner. This did not in the least bit endear Nick to me.

You will have to finish reading this on my new blog woman's eye on media.
Posted by Renee at Tuesday, July 20, 2010