Instead of "Violet Tendencies", Mindy Cohen Should Go Back To The Facts of Life 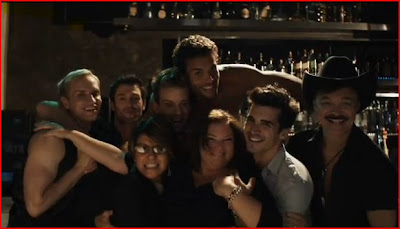 You ever come across a movie trailer that just makes you go WTF?  When I saw  the trailer for "Violet Tendencies,"  the new flick starring Mindy Cohen from "The Facts of Life", I just sat there with my mouth hanging open, feeling like I had been hit by a mack truck. It takes a lot of effort to get that many harmful tropes in one movie, let alone a two minute preview.   I think what bothers me the most about this movie is that some fool will think that it is progressive because it has gay characters -- and there is even sexual contact between gay men.  "Violet Tendencies" is an example of how to get it wrong -- not right.

Synopsis:
Mindy Cohen is turning 40 and her consternation about being single causes her  state  "I'm turning 40 this year, 40. I'm the oldest living fag hag". When she turns to her straight female friend for assurance she is told, "Have you ever thought that maybe your gay friends just don't want to share you? The gays have totally warped your mind."  If only the advice had stopped there.  Instead she says, "you need to go under the knife and kill the fag hag inside."  Of course Mindy takes this seriously and declares, "she's dead."

Why leave it to the straight women to have all the fun?  Her gay friends tells her, "what you need Violet is the male version of you - a fag stag."  When she questions the existence of this, another gay male friend responds, "well actually, a fag stag is urban legend."

Poor Violet, even when she does find a man he is boring. Once again her straight female friend is ready with the catch phrase,"Do you want to be loved, or do you want to be entertained?"

Violet decides to boycott teh gays. Separation is the only way for her to achieve her heterosexual dream.  When she fears the coming revolt from teh gays, she tells her new boyfriend, "I'm afraid that something is about to go down.  Every last man in my life is gay."

Like I said, hot mess from beginning to end.  The term "fag hag" is not cute and in fact seems like an excuse to say a slur.  It is about as endearing as calling a White person a nigger lover for dating inter-racially. The idea that because it is being said between friends that it is acceptable is ridiculous.  You cannot redeem a slur -- and the only people that have the right to even try, are those that the slur is aimed at.

Also, an ENTIRE movie based on the gay BFF - really?   The only thing these men seem to fail to do is pick out her shoes.  She has a stable of gay men fawning around her and this is progressive?  They don't have their own lives or issues, their job is to fix her.  And of course she is miserable, she has surrounded herself with teh gay.  We're not going to talk about how this might be some sort of weird fixation, picking up gay men like they are a card collection, because we have to worry about the fact that she is forty and single.  Can you believe it people, the woman is forty and single - oh the horrors. I suppose as long as they were throwing in all of these homophobic tropes, a little sexism was just that added extra seasoning that this movie needed.

Also, did it not occur to the makers of this film that not all gay men are White?  I cannot tell you how many times I have turned to a movie that is supposedly GLBT friendly and all the characters are White or the MOC are caricatures.  The bar for inclusiveness has been set so low, that movies like "Violet Tendencies" are praised as progressive, when all they do is erase people left right and center -- that is, when they are not making marginalized communities into caricatures. I think that we should chalk this movie up as another faux rainbow brushed failure.


Editors Note:  This is a cross post from my new blog Women's Eye on Media, which I share with Holly of Menstrual Poetry and Women's Tribune.
Posted by Renee at Wednesday, July 07, 2010