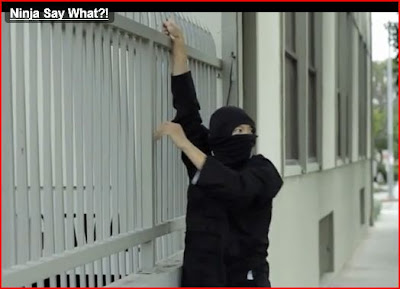 The N word is very complex can mean different things to people at different times.  In the following video you will see Asian people using the word ninja to replace nigger. It is supposed to be a comedic look at how Blacks relate to each other; however I think that it reaffirms far more stereotypes than it challenges.  Simply because a person of colour is performing the satire does not make it any less problematic.  It further is extremely reductive of Blacks and implies that we all have a similar linguistic pattern.  In two scenes you have women berating men for not working.  Of course all Black men are unemployed they are too busy playing hoops to hold down a job.

At the :50 mark, a man with a napkin shoved down his shirt holding a knife and a fork in each hand announces, "what a ninja got to do to get some orange  chicken around here."  This is probably one of the few interesting statements in the entire video because for the first time, there is some sort of awareness that we are not dealing with Blacks but Asians.  It is interesting that food is used as the marker of race because many individuals believe they understand various races and or culture simply by consuming food.  It amounts to literally eating the "other."

Such awareness is short lived as at 1:11, a Black man enters the scene and says, "What's the deal my ninjas? A member of the group informs him "that ain't cool man" and they share an awkward moment. They then take him aside to explain that there is a difference between ninja and ninjer in a very paternalistic manner.  This is the scene that sealed the dislike for me.  I don't care what other racialized body is initiating the conversation, commentary beyond  the word nigger is harmful is not your place.  No group has the right  use a word that has caused Blacks so much harm and use it make a joke with.  No group has the right  to co-op our culture for the sake of supposed social commentary.  I don't give a damn that these actors aren't White, this is not their experience to play with.  I find it interesting that no matter the group, nigger seems to be the first word people want to reach for in North America.  They always have to find someone lower than themselves.

This video is meant to be comedic and double for social commentary, but it rises to the level of racial mockery from the very beginning. You cannot pretend to be another racial group without it being highly prejudicial and though no Blackface is involved, the level buffonery in the video clip only serves to reduce Blacks.   Asians may not have the same institutional power as Whiteness, but that does not eliminate their ability to have prejudice against other POC.  You will note that throughout my commentary, I have not referred to their actions as racist and that is  because the element of power is missing.  As POC, we often focus our critique on Whiteness, but it is important to note, that though the element of power is missing  in the acts of racial prejudice committed by other marginalized groups, it too is the work of Whiteness because it serves to come us separated from each other and reinforces a very cruel hierarchy. Anyone who attempts to use race in a comedic way had damn well better be on the ball because the laugh that they are seeking could actually result in pain and this video is the perfect example of that.
Posted by Renee at Wednesday, July 21, 2010