When I first saw the headline for the following video: "Yep I'm A Racist," I assumed that this was some sort of ironic sort of fauxgressive nonsense that supposedly liberal people spout, but instead it turned out to be good ole fashioned God fearing racism. Who knows, at this rate, the KKK might be fashionable again.  I am once again going to put this nonsense below the fold for those of you that are at work.

Cameraman:  So what does all this mean, "Yup I'm a Racist"? Can you explain to people why you think that racism is okay?
Vendor:  It's not racism. I'm tired of being called a racist.
Cameraman:  So the, Yup I'm a racist is saying that you don't want to be called a racist?
Female Vendor:   Yeah it cause the government think we are cause this is what we support.
Camera focuses in on the following shirt. 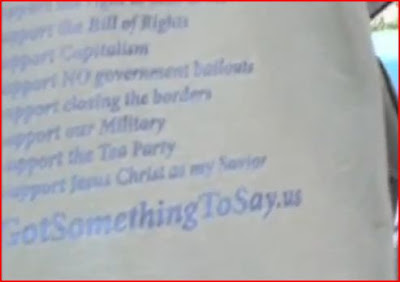 Female Vendor:  Well we have the right to bear arms and the government says no you don't.

Cameraman: Well actually the supreme court just said yeah you can so you can carry whatever weapon you want to.

Female Vendor: That means closing the banana crop with Arizona

Cameraman: So that means closing the border to Mexicans

Female Vendor:  to illegals, illegals. Pakistani that are coming across the border through Mexico.


The video continues to be a hot mess of White cluelessness.  They're not really being racist, hell no, they're protecting their rights. What better way to celebrate the 4th of July? To make sure the point is properly articulated, they want people to know that God, (yep the almighty) wants them to have guns. These are exactly the same type of people that are going to sign up for Glenn Beck University.

I don't even know how many times it has been said that poor White people are their own worst enemy.  History has proven that their determination to overvalue Whiteness has not inflated their value or social position;  it has given them negative gains. They are the largest dupes to the system on the globe  and furthermore, this stupidity is generational.  Marginalized people like  WOC, the disabled or the GLBT community know damn well who is keeping them down, but the only enemy that poor uneducated White people can see are the people best equipped to be their allies.

It is almost a relief that they are more than willing to wear shirts like, "yup, I'm A Racist."  The tragedy is that they see no harm in this.  Yes POC will be hurt by this overt display of racism, but poor White people are also shooting themselves in the foot.  They refuse to see that the White bourgeoisie is offering up undocumented workers as a distraction. They don't really want to do the jobs that undocumented workers do, but they sure as hell want the cheap labour because it means cheap commodities.  None of this is hard to reason our if you are not holding onto Whiteness for a lifeline.  I think it is not that these people can't get it because of lack of education; they simply don't want to get it.
Posted by Renee at Tuesday, July 06, 2010