Monica of TransGriot and I were just talking about the fact that it had been awhile since PeTA has done something disgusting and sure enough, once again they decided that animal advocacy while respecting human beings is an impossibility for them.

Janet Jackson just signed a contract to be the spokesperson for Blackglama a company that sells luxury fur coats. 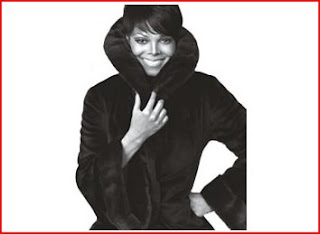 Obviously as animal rights activists, PeTA has a huge problem with anyone wearing fur.  I can respect the argument, though I would like to point out that for Black women, there is a lot more involved than animal cruelty.  Fur is a marker of success and a commodity that was simply out of reach of many women of colour.  Now that many more Black women are achieving financial wealth,  they want the same trappings of success that have traditionally belonged to White women.  Because PeTA is clueless about racial dynamics, this is something they have repeatedly failed to consider.

PeTA could have handled this situation with respect, thereby helping to heal some of the purposeful harm that they have caused the Black community, but once again they chose to devalue Black lives.


"It's amazing what celebrities will do when their careers are on a downslide, but we didn't think that Janet was this desperate. Surely, she knows enough about suffering and unjustified death to recognize that both occur in the production of a fur coat. We are asking her to think again and to donate these stolen skins to be used as bedding for animals orphaned by other human-caused disasters, such as loss of habitat," PETA spokeswoman Amanda Schinke said in a statement. [source]

Did you catch that? They compared the death of Michael Jackson to the animals that are used for the production of fur coats.  How many times must it be said, that it is absolutely racist to compare people of colour to animals, because this exact same analogy has been used by Whiteness to deny us human rights for centuries?  In the biological sense we may all be animals, but this particular comparison has only ever carried weight, when it is used against POC as a weapon by Whiteness.

Michael Jackson has been dead for just over a year and is barely cold in his grave, yet PeTA felt that it was within their right to co-opt his death for their purposes.  This is not a case of the greater good.  This is yet another example of PeTA proving that they have no respect for people of colour. The White management of PeTA can afford to ignore race and focus on their goal of animal liberation because privilege protects them from the very isms that are regularly willing to exploit. PeTA members are quick to lecture Blacks of not fully fighting for animal liberation; however, they are equally guilty of ignoring race in their critique and in fact any ism, which is why they routinely engage in behaviour that is sexist, fatphobic, classist, homophobic and transphobic.I can say unequivocally, that as long as human beings continue to be oppressed, that is where my energy will be devoted.  This is absolutely speciest and I have no problem with that.

Despite PeTA's repeated disgusting behaviour, celebrities continue support their cause refusing to separate their desire to encourage veganism/vegetarianism and PeTA's consistent support of harmful isms.  When individuals who are not vegans or vegetarians dare to comment on this situation, our out group status is used to defend PeTA.  Regardless of whether or not the complaining individual is a vegan./vegetarian, it does not in anyway invalidate the fact that PeTA is absolutely an unconscionable organization.  To ignore the harm done by PeTA is its own form of speciesm, because it places the welfare of animals over and above marginalized human beings.

To some degree, I am preaching to the choir when I write a post on PeTA in this space; however I believe that we can never stop talking about organizations that support harmful isms, even though it does become repetitive because the damage that they do will not come to an end with our silence.
Posted by Renee at Monday, July 19, 2010