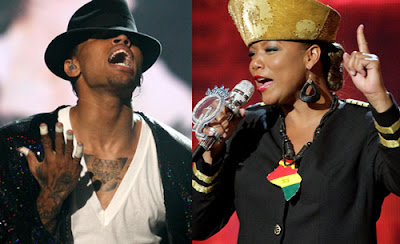 By now I am sure that you have heard all about Chris Brown's performance for the 10th annual BET awards.  Yes, the new age Ike Turner got emotional singing Michael Jackson's man in the mirror, and now we are all supposed to say let bygones be bygones.
I have much love for Queen Latifah, but Dana honey, you were wrong when you made the following statement:

"I thought Chris Brown's performance was amazing, just amazing," she raves. "Not only was it a knockout performance, but his heartfelt emotion ... you can't plan that, you can't write that, it's just truth."

She also thinks that it's time to forgive Brown and move on. "The guy is a young guy and he made a big mistake and he needs to bounce back from that. And he needs an opportunity for a second chance," she says. "We can't condemn that kid. He's a kid and he needs to correct the mistake for the future, not live in the past."

I cannot believe that she said the phrase "We can't keep beating him up," in reference to the public's refusal to continue to support Chris Brown's career. In case the queen forgot, the only one that got beaten up in that relationship was Rihanna.  It is her body that was covered in bruises, when Brown decided that he had the right to lay hands on her in anger.
I get the desire to defend Black men.  They have been subjected to much discrimination, but this is not a time for racial solidarity -- this is a time for remembering that despite the oppression that they face, they can still come home and beat Black women like we are runaway slaves, because they exist with male privielge.  Chris Brown is young and some would say that he talented; however, the man is nothing more than a woman beating, new age Ike Turner.

Reading this made me remember a very terrifying scene that I watched during the first O.J. Simpson (another woman beating negro)  trial.  When he was found  not guilty,  Black women that were residing in a battered women's shelter stood up and cheered.  These were women that knew first hand the terror of having a man use his fists and God knows whatever else to enforce their will -- and yet the racial solidarity of the moment caused them to forget that Black men are not always an ally to Black women.

Shared history, race, and familial ties, will always bring Black men and Black women together; however that does not mean that it is always in our best interest to support them. What Queen Latifah said about Chris Brown was a betrayal of Black women, and more importantly, it set a terrible example for young Black girls.  We are not obligated to forgive Brown, and we should certainly not forget for one moment what he has done.  Keep in mind that this is a man who knew first hand how painful violence against women is, because he grew up watching his mother get beaten, and yet he still turned into an abuser.

No one has to support Chris Brown with their hard earned dollars, no matter how many times he breaks down in tears.  I certainly agree that the recidivism rate is high because we don't allow ex-criminals a chance to earn a living, but Brown has made more than enough money to support himself if he manages it properly and stops living high on the hog.  Furthermore, nothing is stopping him from going out to get a regular 9-5 (you know those shitty jobs that regular Black folk work).  He simply wants to retain his celebrity status because he feels entitled.  Every  dollar that comes into my hands is something that I work very hard for, and so I see no reason why a single dime should support Breezy B his trifling woman beating ass.

This is a man that has claimed to have changed,  yet he still used sexism and hueism to attack Sandra Rose  recently via twitter.  Why should we believe this latest claim of metamorphosis?  What Brown has failed to realize, is that when someone professes to have changed, action must quickly follow.  Has he been a loud and open advocate to end violence against women?  Has he sought counseling to deal with his violent tendencies?  Has he attempted to reach out to other young Black men and become an example that is worthy of following? Until these conditions are met, the call to forgive Chris Brown is premature to say these least.  He is not entitled to the hard earned dollars of Black women, when he has shown such little regard for our safety and well-being.  Brown needs to keep looking at "the man in the mirror" until he can find some shred of responsibility and human decency.
Posted by Renee at Friday, July 02, 2010