You may remember that awhile back I was engaged in a blog war with the excellent Cara of The Curvature and Feministe, regarding a little collective that I revealed to the world - The Feminist Kitty Collective.  At the time, few were openly talking about their love of dogs, and instead, many were privileging cats, thus ignoring the oppression faced by dogs. This is a very serious matter, because in the process, the terrible conditions that some female dogs must endure is ignored, due to the fact that women have been seduced by nefarious felines. I watched in horror as feminists doled out cat nip, desperate to receive even the smallest return of their love and affection to cats. Not only are women working a double day, hitting the glass ceiling, and doing the majority of housework, cats have now lowered them to kitty litter duty; a task whispered in small circles to be noxious to the nose. Right in front of their so-called feminist companions, cats do their business and meow for their female owners servants to clean their mess.  How can this clear indoctrination and enslavement of women serve to benefit women's social status?   I announced that for the sake of every bitch in need of a healthy game of fetch:
Hey Hey, Ho Ho, Feminist Cat Lovers Have Got To Go
I spoke of the terrible pet performance that dogs are forced into: sitting, coming (no that is not as good as it sounds) and staying on command no less, while these so called feminst cats cruel overloads roam around freely.   I thought I was beginning to see an end to the stranglehold of cat hegemony, but then, the Kitty Colllective declared all out war.  They meowed foul and circled the wagons determined to maintain the oppressive cat supremacy that seems to have taken hold of so many feminists.  These women claimed to care about intersectionality and yet day after day they betrayed these principles to post pictures of cats, thus leaving dogs to the mercy of patriarchy who have declared them mans best friend.  So much for equality and women's liberation, because  Felis catus is quick to declare 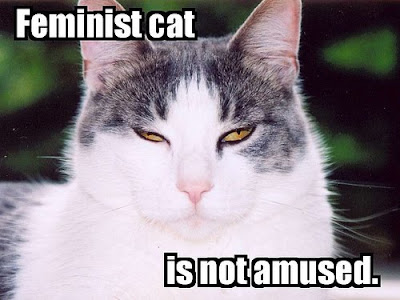 when their feminist companions slaves are slow with an ear scratch or dare to use the lint brush without thanking these stuck up kitties for sharing their hair.

After I finally decided that the label I wanted to use is womanist and not feminist, poor dogs again found little support due to the terrible backlash of feminist cat supporters.  Sure feminist dog lovers spoke loudly at first, but interest soon waned -- and kitty tyranny once again took over blogandia.
When I got a cat, a few people suggested that I had joined the collective, however, Darren is so awesome we have bestowed him with the label un-dog, thus saving me from becoming assimilated like a member of the borg.  He may still maintain his use of the litter box, however with his gentle nature and amazing loyalty, he certainly does show some true DOG characteristics. Darren, our family un-dog is one of the few cats determined to have a relationship based on mutual caring, unlike feminist cats, who seem to demand to be photographed and placed on display daily.
At any rate, we are not here to talk about me.  No, we are hear to talk about a very public betrayal that has yet to be openly acknowledged for the true departure that I like to think of as unavoidable.  It seems that feminist cat is losing hir tyrannical stranglehold on the feminist blogosphere; ever so quietly, feminist cat's omnipotence is coming to end. Last year I warned of this day;  I knew eventually the uprising would take hold.  One feminist (and might I add a very brave feminist), has stepped outside of the kitty collective to take up the mantle of dog freedom  by bravely posted dog pictures on her blog repeatedly.  Facing the wrath of the kitty collective,
Melissa McEwan
has not only posted pictures of teh doggeh on her blog Shakesville, she has forced her feminist cats to share their home. 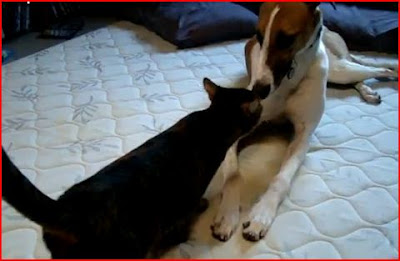 Though Melissa McEwan has not openly called for support in her act of what can be understood as nothing less than mutiny, and a bid for freedom, I think all of you who have secretly been hiding your doggeh affection should once again rise to the challenge and stand in solidarity with her.  If the world does not come to the awareness that some feminists take dog oppression seriously, not only will it continue to be ignored, feminists like Melissa McEwan will have their credibility challenged when they speak about serious issues.  You know how people love to declare what is and is not feminist. They will whisper about her behind her back, openly questionoing what kind of feminist owns and loves a dog. As news spreads, people will whisper that Melissa McEwan has gone rogue, all in an attempt to maintain the hegemony of the kitty collective.  The patriarchy will refuse to even pretend to acknowledge the issues she advocates on behalf of because everyone knows that humorless, bra burning feminists serve cats and not dogs. This will be one less woman who will be able to wage battle daily.


As a self declared womanist, I may just be a humble outsider, but I have been privy to the whispers accusing Melissa McEwan  of playing fetch.  For the sake of doggy solidarity, I have written this post under the label of Sunday Shame to hide it from the Kitty Collective, but I highly suspect that they may not be fooled by its cryptic nature -- and so I say to you once again, Feminist Dog Lovers Of The World Unite. Please use this thread to support the end of teh doggeh oppression or share the ways in which you have become indoctrinated by the kitty collective in the hope that your story may help others.
Posted by Renee at Sunday, July 04, 2010