First let me start off with a little programming note.  Tammi and will be running our podcast tonight at 6pm EST. For those of you that miss it, we will be posting it on our respective blog afterwords. On that note, let's get right into it.

I LOVED last nights episode, though once again there were problematic elements that we really need to talk about.  It is fine to love watching something, but we should always be aware of what we are consuming and this is why I have decided to move away from the straight recap platform. 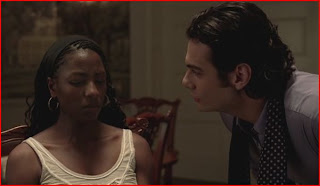 As we know, Tara in the books is White and though she did have a very twisted relationship with Franklin Mott, the beginning of last nights episode was one of the most racist scenes that I have viewed on "True Blood" thus far. Tara was tied to a chair and Russell's lover treated her like a dog saying,"Mmm spicey, who's a pretty girl huh?  You're a pretty girl, you're pretty yes you are".  He then proceed to snarl at her causing her to jump." This is the second time on the show that they have referred to people who are considered raced or of an  ethnicity other than White in this manner and no such terminology has been used for the White human victims.  Some may debate the racial aspect of this, but I feel that this is reductive to people of colour.  I am very aware that we are talking about vampires who naturally see humans as less than; however, resorting to treating Tara like a dog is simply unacceptable and I have yet to see any White human treated in this manner by vampires.  I believe that Ball felt that he could get away with this specifically because Tara is a Black woman.

To compound matters Russell, Bill and Lorena return from feasting on the stripper and  declare that they do not want her. When Tara asks Bill for help, he soundly refuses. This is Bill, the same vampire that is supposedly trying to be different and reject his vampire nature, but apparently that is only relevant when it comes to helping his beloved Sook-eh. While I understand that Sookie is the protagonist in this story, the complete lack of regard for any other woman in the series is particularly troubling.

When, Russell questions Tara's presence in his home, Franklin responds with, "This one is spectacularly different.  This one is such a disaster we could be twins."  What is this but another excuse for a White male to have access to a Black female body?  Yes, I know Franklin is  a vampire, but the Whiteness of his body cannot be divorced in this situation.   He shows his love for her by placing her in a White gown and then tying her to a bed.  Unfortunately, when Tara does escape, she is stopped by a werewolf.  The image of her lying beneath a naked White man once again against her will smacks of the cavalier way in which Tara's agency is always removed, whereas; Sookie is very often given choice.

Tara must rely on her wits and declares that she only tried to escape because she is scared of the other vampires.  Franklin promises to protect her and then proposes marriage asking her to become his "vampire bride."  Of course, Tara does not really have a choice in this matter. Tara is property, much like Black women have historically been viewed. 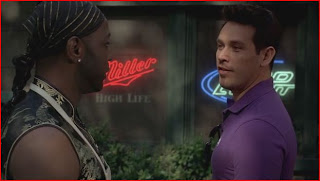 I have been waiting since the beginning of the season for the storyline between Lafayette and Jesus to heat up. When he showed up at Merlotts to ask Lafayette out on a date, I would be lying if I said that I did not get down right giddy.  My only reservation is that the show has a tendency to sanitize same-sex love scenes.  If Jesus and Lafayette do couple as promised, Ball will be doing a disservice both to the GLBT community and the viewing audience, if their interactions are portrayed with less sexuality, sensuality, love and faith than the straight couples we have witnessed over the years. I will say that thus far the flirting between them has been really sweet and I especially loved when Lafayette said to Jesus, "I can't be looking at folk with all that grease flying around in the kitchen, but I saw you every now and again."  Lafayette has had a very hard life and I would love to see him find a little happiness. 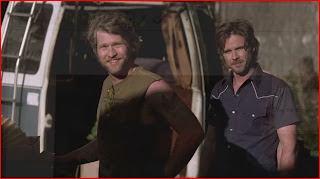 The other scene that absolutely touched me last night was when Terry informed Sam that he was moving in with Arlene.

"Yep, yes sir, me Terry Belfleur is moving in with Arlene Fowler.  I ain't worried. I've never been so not worried. This is what normal people do, they fall in love and make each other laugh, they move in together, they raise kids, they fight over money, they get old and fat together and it's normal.  And it's happening to me, I can't believe it."

My only regret in this situation is that the woman he has chosen is Arlene.  It particularly makes me sad when I think of the joy that he expressed over the child that isn't his.  People have justified Arlene's lie saying that it would be unfair to saddle the baby with Rene as a father, but what about the damage that this is going to do to Terry when he finds out that everything he thought he had is a lie.  This kind of secrets always come out. 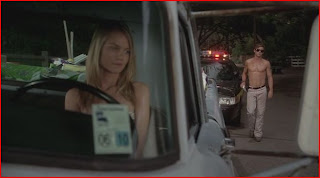 I actually thought I would finally have an episode without Jason being a complete irritant, but that belief was very short lived.  When he started throwing the ball against the wall and fingerprinting himself out of boredom, I have to admit that it was funny.  What I didn't enjoy was his stalker like behaviour with Crystal.  Stealing a police car, thus forcing her to pull over and then demanding that she give him her I.D. was extremely uncomfortable.  Does Ball have any idea the abuse that women have been subjected to by authority figure, and those pretending to be police officers?  He seemed to want to use this scene as a bit of comic relief.

When Crystal met him outside of Merlotts and they went for a walk, I once again believed that Jason could possibly be redeemed, that is until he said, "If you don't want me to touch you anymore, if you want me to stop right here, I'm gonna have to step away cause I'm all upset".Right, he is upset at the thought that Crystal won't grant him access to her body.  There is no consideration about how she might really feel, Jason is thinking about his raging unfulfilled erection. He basically said I am going to be mad, if you don't let me do what I want and this is a form of coercion and should be recognized as such.

I would be remiss if I didn't mention how much I loved seeing Jessica dazzle Arlene's patrons to inform them not to tip their waitress.  Jessica always gets her revenge and it is often in the most amusing ways. I also loved the look back in time to Eric's first run in with the werewolves and Russell.  Now we finally know where his hatred of them comes from.  He swore revenge on his father's death bed and I really do believe that Russell will pay before the end of the season.  Finally, yet another display of Sookie's power at the end of the episode was interesting.  I am not certain at this point that I like this deviation from the books, but it seems that Ball long ago decided to put his own take on the Sookie Stackhouse series.
Posted by Renee at Monday, July 19, 2010