Big Brother: What Does It Mean To Be A Good Gay Person? 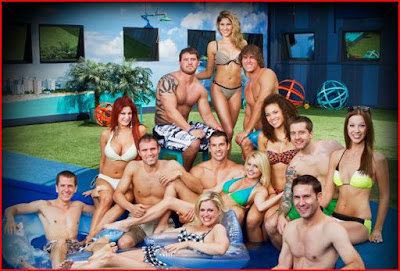 Holly had the brilliant idea of blogging "Big Brother" this summer.  I must admit that I knew how much I would hate this, having stopped watching "Big Brother" years ago.  As with every year, this year there is a token gay male on the show.  Nothing like fake diversity to really make you think that CBS gives a damn about marginalized people.  This year, Reagan is fulfilling this role. Oddly enough, of the atrocious house guests participating in what I like to call the summer torture, Reagan is by far the most real and the most likable. He seems very unafraid to be himself and on a show that is extremely contrived, trust me when I say that this is a rarity.

Last week Rachel, the woman that Big Brother fans love to hate was eliminated.  Unfortunately, this week she was allowed back for 24 hours to spread her special brand of ignorance, once more through the Big Brother house.  I am sure by now you are wondering why I am bringing up this show.  Well, Rachel and Reagan had a huge fight in the backyard and I think that it will lead to a very interesting conversation about homophobia and heterosexism.  Even as Rachel claims to love gay people, watching the video will quickly make it evident that she is as rude, hateful and ignorant as they come.

Rachel: Do you have to be the biggest bitch because you're gay? Is that what makes you happy?
Reagan: No Rachel, I'm not a big bitch because I'm gay.  I'm a big bitch because you're an absolute monster.
Rachel: I'm a monster?
Reagan: You've attacked almost every single person in this house.
Rachel: Reagan I am a good person, I know who I am.
Reagan: You're such a good person that's why you are out of here on a unanimous vote, despite trying to be nice to everybody, despite having your boyfriend coming around bullying everyone in this house. That's a testament to what a good person you are.
Rachel: You can't even keep a boyfriend.
Reagan: Okay you can't even stay in the game of Big Brother.
The two have now moved into the backyard and are now yelling at each other.
Rachel: Nobody in this house is your real friend Reagan.  Nobody likes you in real life.
Regan: Really?
Rachel: You know what? This is a game and if this is your game play you suck as it.
Reagan: Rachel you were out of the house last week. This last person I am going to take advice from is you.
Rachel: Well, I'm back
Reagan: Yeah for 24 hours.  You're here for a limited time because your boy friend did a Pandora's box and unleashed something horrible in the house. Wake up.
The house guests scurry to the center of the kitchen as the two head toward the kitchen.
Rachel: Why don't you try to insult me a little bit more Reagan.
Reagan: Why don't you try to insult me.Why do you talk about me being gay  and me being a bitch and me doing all of these other things to you.
Rachel: Because I love gay people and you suck at it.
Reagan: Yes you clearly love gay people.
Rachel: I do Reagan and you suck at it. Because uh you're not even.
Regan: Because uh uh uh -- If you're gonna try and come at me Rachel, do it a little bit quicker.  One day you will realize that the attention that you want is not from negative behaviour but by treating people with decency and respect.  And if you think that you are going to go through life running over people and treating them the way that you have treated everybody in this house, you have another coming.  You will get what is coming to you, believe me.  Take it as a tip and learn from it.

On various entertainment blogs this argument is being billed as a cat fat.  Granted, Rachel is not a nice person, but to call it a cat fight after seeing the way in which she engaged in such rampant heterosexism, is to further demean Regan.  Think about the audacity of this woman.  She told a gay man that he was doing gay wrong.  How can you do your own identity wrong?  The issue is that when she came into the house and met Regan, she expected him to be her new gay bff and sit and talk about shoes and shopping all day.

Just like any other ism, gay men face stereotypes that they must battle daily. When they fail to perform gayness in a way that our heterosexist society finds acceptable, they are attacked. This conversation is about so much more than an argument on a reality show.  It is absolutely reflective of the way that we try to enforce submissiveness and performance on marginalized bodies. Of course he was doing gay wrong, he refused to be her passive play thing and why else do gay men exist, if not to amuse straight women?

Rachel further had the nerve to say that she loved gay people.  Really?  Who says that?  Um yeah a bigot.  You cannot love a group en masse like that, because it means you don't see them as individuals.  I am surprised she didn't trot out a gay bff back in Vegas to serve as proof, of her shining rainbow positive attitude.  What Rachel does not see, is that as a straight White cisgender woman, she will always be a person whereas; everything that Reagan does will be deemed representative of the entire GLBT community, for better or for worse.  She can be on a reality television show and make a complete ass of herself and that is the freedom of privilege.

While such comments are not always yelled at a marginalized person, they are certainly continually directed at us.  Rachel believed that by declaring her love for gay people, she had erased the way in which she tried to oppress Regan. Everyday it is the small slights that end up doing the most damage. It is the day in and day out living as a minority that breaks ones heart.  A safe space is so precious and at this moment Regan has no one he can turn to, or any place where he can shut out the rigors of the discrimination he is forced to live with. Oppression is pervasive; it stalks you every minute of everyday and being in a small microcosm helps to better highlight what happens to all marginalized bodies on a daily basis.

Even as I watched the video, I knew that many people would not quite get why what Rachel did was so heinous.  She did not say a gay slur after all.  In many places homophobia is well disguised.  It can come in the form of asking two gay men who is the boss in their relationship, or even the constant demands to explain their sexual actions.  This of course is not seen as intrusive, because for some reason, straight people believe they have the right to access the most personal aspect of the lives of gay people. It could come in the form of not acknowledging someone's lifetime partner, or assuming that because you share the same sex with a gay person, that they are dying to have sex with you. In hundreds of little ways, straight people find ways to let the GLBT community know that socially they are considered other.

CBS made a profit from this fight.  This video has been posted on several blogs bringing the show more attention than it deserves, but the person that paid the price is Regan.  No amount of money makes up for being publicly demeaned.  Yes, he defended himself well, but in a fair and equal society he never would have been put into that situation to being with.  If you are a marginalized person, you can never let your guard down, because you never know when the next left hook is headed your way. Rachel cannot win the game because she has already been eliminated, but her actions, like the millions of other homophobic actions that happen everyday, serve to mark a vital part of our society as less than.