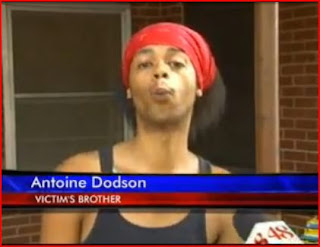 In Huntsville Alabama, the Dodson family were sleeping, when a man broke into Kelly Dodson's room which she shared with her little girl.  A struggle ensued in which he dragged her across the room. Her brother Antoine heard her scream and rushed to the aid of his sister, thus scaring off  the would be assailant.  When reporters from WAFF came to investigate the incident, the Dodson's invited them onto their property to speak about what happened.   Antoine said the sole purpose of him speaking out so forcefully, is that he wanted to warn hid neighbors that they are not safe.

In his response, to the attempted rape of his sister Antoine had the following to say:


Obviously we have a rapist in Lincoln Park, he is climbin in your window, he's snatching your people  up.  So y'all need to hide your kid, hide your wife and hide your husband cause they rapin everybody out here.  We got your t-shirt you done left your fingerprints behind and all.  You're so dum, you're really dumb for  real.  You don't have to come and confess what you did, we're looking for you.  We, we're gonna find you. So you can run and tell that homeboy.

Antoine's response quickly went viral and became one of the most watched videos on youtube and WAFF.  Apparently, Antoine now has a Facebook fan page, t-shirt line, and a ringtone. His earlier comments have already been mixed into a song.  When asked what he thought about his sudden fame Dodson had this to say:


I know I was so glad, 'cause I feel like I belong on somebody TV.  What people fail to realize is that our family we don't walk around crying and acting sad.  You know what I'm saying?  We just dust our shoulders off and keep on moving.  Pretty much I'm going to be his ass and then call the police while I am beating his ass because I want him to feel how he made my sister feel.

According to the follow up report, (note: link has a homophobic title) some people are upset  by what Dodson has done and say that his actions reflect negatively on the community.  I however fail to see how stopping your sister from being raped is a bad thing..  I think what people are really upset about, is the fact that Dodson is Black and effeminate. There are far too many people in the Black community that are determined to enforce strict gender performance.  Personally, I think the man is fierce just the way he is.

What really caught my attention about this case is not the fact that Antoine acted to save his sister, but that the story went viral.  The reporter refers to him as a victim to assert his right to tell his story, but I think what we should be asking is why society was not more interested in his sister -- you know, the woman that was almost raped.  She has virtually been erased from this story. The assaults of Black women are routinely ignored by the media and this is even more common if the victim is poor.  Society is not paying attention to this story because they are concerned by the attempted violation of Kelly Dodson.  Once again, the lived experience of a WOC is being erased because society does not value Black women, to many we exist to be violated. It is disgusting that people are worried about how Antoine is perceived, or even trying to frame him as the victim, when it was Kelly that was attacked.  To his credit, Antoine continues to show concern  for his sister, which is more than I can say about those that have made the videos on the news story go viral.

In a week or perhaps less, no one will remember his name, and he will join his sister in obscurity.  Were it not for the fact that people were entertained, this would have been a 2 minute blip on a local news cast that would already have been forgotten.  It's ridiculous that the media is attempting to paint this as their attempt to encourage victims to speak out, when they routinely avoid crimes against POC and furthermore, are heavily invested in ensuring that negative stereotypes about Blacks are enforced.  Dodson is happy about the notoriety, yet he seems to fail to understand that to the viewing public, he is just another dancing Bo jangles, and not a person. The mere fact that he is referred to as the "homo thug" and his sister has been forgotten proves that.  On the second interview, the reporter didn't even bother to ask how Kelly is doing, because she is not the story.  The story is whatever entertains Whiteness. "So you can run and tell that homeboy."