Finally We Hear From Kelly Dodson, Sister of Antoine Dodson

A few weeks ago, the Dodson’s unwittingly became internet sensations after a man broke into their home intent on raping Kelly.  The attempted assault of Kelly became secondary, as the public fixated on Antoine Dodson.  Antoine quickly had a t-shirt line, facebook page and blog up. A mix of his irate commentary to a reporter was created and sold on I-Tunes  He earned enough money to move his family out of the projects. Antoine did indeed come to rescue of his sister that night, but he should not have been the center of this story, no matter how heroic his actions were.  Finally, Kelly was given a front center place when the two filmed a video and placed it on youtube.  In the interest of giving voice to those that have been marginalized, I decided to post the video.  If we are going to talk about what happened, we need to remember that the person that was attacked was Kelly Dodson. 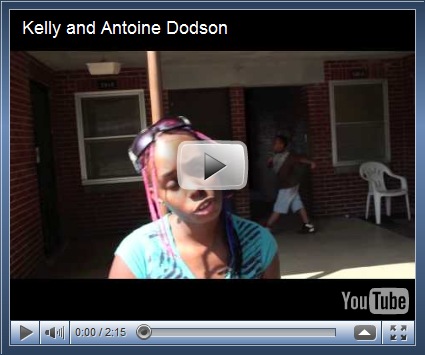 Antoine: So Kelly the people been asking me how is Kelly doing. Like what’s she got going? We wanna see her, we wanna talk to her, we wanna see how she looks. People think you are so fine. (Antoine reaches out to touch her shoulder) So what you wanna say?

Kelly: There’s really not much to say but I want to thank you guys for supporting me and my family and my brother mostly because y’ll didn’t have to do what y’all did for me and my family. And so I am very happy for that but I’m still kind of shook up (unintelligible). You know I have a two year old that I have to, I have to take around people and she be so shook up and a certain knock on at the door and I’m like dang (unintelligible) This is what happened to me that night.  Tell everybody, you know if the perp is out there you are going to get caught. I’m not looking for you, when the time come you’re going to get caught because Huntsville is really so small. So you really can’t hid in Huntsville Alabama. If you watching this, I hope that you realize all the hurtful things you did.

Antoine: All the pain that you has caused our family, you just not know what you did dumbass. Oh girl, it is like living that life all over again. Every time that I come to this area, I always relive that night and it is so scary and it is so painful. Girl I know what we

Kelly: (unintelligible) There’s really not much that I can say right now because I don’t know how to explain it to you because you really did a lot of damage to me whether you know it or not and if it wasn’t for Antoine, you probably would have got what you came in there for but you didn’t.  I just want to know how you feel about the situation

Antoine: I want to know what made you come in that night.  Was you watchin us?  Like we was just up like around two something.  What made you do that?  That’s retarded, you’re retarded and you going get caught when you get through dummy.