Now It's Semen In A Water Bottle 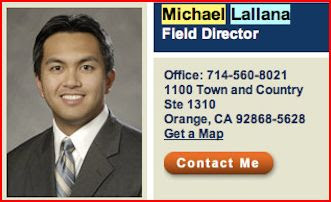 Awhile back, I wrote a post regarding a man that was spraying his semen on unsuspecting women.  At the time, I thought that this was the height of disgusting, but it seems that people can always sink lower. According to the L.A. Times, 31 year old Michael Kevin Lallana of Fullerton, California, allegedly placed his semen into the water bottle of his female co-worker twice.  Apparently, she became ill the first time she tasted the tainted water and on the second occasion, decided to send the water bottle out for testing. It was revealed that the water contained semen.  Lallana has been charged with two misdemeanor counts of "releasing an offensive material in a public place."  If convicted he faces three years in prison and mandatory sex offender registration. Lallana probably felt that he could get away with this one because most people who taste something that does not agree with them, will simply discard it and move onto other things.

This is not some college prank, it is an absolute violation of the victim. The is the second case that I have recently come across of men using their body fluids inappropriately.  I am starting to wonder if this is becoming a trend like upskirting?  When this story was reported on Gawker, the commenters seemed to find it gross but somehow amusing. Minimizing assaults against women is just one method in which we socially suggest that women's bodies are meant for violation.

Many questioned the fact that the victim said that ingesting the semen made her ill, because this a substance that men and women across the globe ingest daily.   Some questioned her inability to see the semen in the water before ingesting it.  Their comments prove that regardless what the circumstances are, the social narrative of questioning the victims role in their own violation is very strong.  If anything, commenters should have been asking what made Lallana decide to allegedly taint the water with his semen. In spaces like Womanist Musings, we know that victim blaming is absolutely unacceptable, but how do we translate this belief or counteract this idea in spaces that are not safe?  If we abandon them, we leave this idea unchallenged, but if we choose to interact, it comes with a personal cost. Either way, we are paying a cost and this is something that people who believe that we have achieved gender parity continually fail to acknowledge.